I didn't know one single black person until I was almost nineteen years old and so, naturally, I assumed that all black people were superior to me in every way.

Living in a home with a father and older brother who were obsessed with professional sports, I naturally came to believe that black men were all better, stronger, smarter athletes. From television and movies I learned that black men and women had voices that could do things white voices just couldn't, and since I loved to sing, this fostered a sadness that I extrapolated out to mean that white people probably sucked tank at everything - at least compared to blacks.

My lilly-white life could not last forever, though, and in my second summer of treeplanting, after leaving my cracker-white missionary home and enrolling in an almost-completely cracker-white university, I made my first blackish-brown friend, a Mr. Emmanuel Ali Al-Sharif Abdallah Achmud. 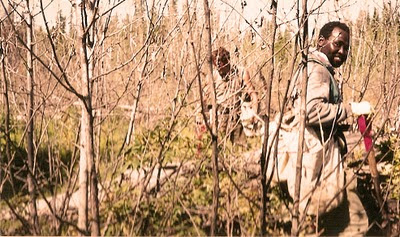 Emmanuel was a chubby, thirty-one year old political refugee from Sudan, the only person I had ever met who'd been tortured and had the scars to prove it. He had been the leader of the student union in Khartoum, and when they'd begun to agitate against the government about increased tuition, someone had decided Emmanuel would look better with permanent raised welts all over his back. He escaped and eventually fled to Canada, where he got a summer job treeplanting in order to put together the cash, goats and cows necessary to pay the dowry for his Congolese fiancée.

That proved to be a powerful motivation for hard work, and Emmanuel ended up further confirming my prejudices by beginning to out-plant me (me, the seasoned veteran!) by the start of our second contract. We did a little extra work with a different company between contracts, and after I taunted him about my higher tally one day, saying "Who's the big chief bwana in the village now, Emmanuel?" he proceeded to outplant me every day - by a lot - for the rest of the job.

On the last day he walked up to me and, after hearing how badly he had once again beaten me, he fixed me with a paternal gaze and sadly shaking his head intoned, "You chellanged me, Chosh. You chellenged me."

As crippling as it was for my fragile ego to be beaten so resoundingly by a rolly-polly thirty-one-year-old, it was impossible not to love Emmanuel. He had a ready smile, a generous spirit and a deep, chuckling bass laugh. When I once joked that I wanted to plant with him on a block where we had seen a lot of black bears because he was so old and fat that I could easily outrun him and avoid being eaten, he said, laughing, "Oh no, Chosh. Eef tha beyah comb, he will say, 'hello my black brothah,' and then he will giff me a hug and come to eat you!"

Emmanuel was funny in other ways, too. In the morning in the cook tent he made these death-sandwiches out of the grossest possible ingredients you could think to combine: I'm talkin' tuna-sardine-onion-egg-cheese-mayo-celery-strawberry jam... and then he would leave them in his bag all day to ripen so he could eat them on the truck ride home - nearly asphyxiating the lot of us. During the day, he mostly ate oranges... just oranges... and would bag up two fifty-pound tree boxes to my one. Then he would plod along with near-perfect, methodical efficiency. He looked a bit like a slow-moving moose out there, but he kept sticking in tree after tree without hesitation, each piecework-pounded seedling bringing him a little closer to that dowry.

Emmanuel's innate early intelligence at what is actually rather mentally demanding work (if you do it right) was astounding. The really crazy thing, though, was what he was wearing during all of this grueling manual labor. On a particularly hot July day, when I had stripped down to t-shirt and shorts and was still sweating, I asked him what he had on. "Let us see," he said, "I am theenking: two sweatah, thees headbandt [fleece], sweat pents, a t-shoat, a payah off long johns, two payah of soaks, andt wan beating-wife."

These odd sartorial habits of his came to mind recently when a woman I know who works for the Discovery Place (scientific funworld) in Charlotte sent me a link to an exhibit they are setting up for this weekend called "Race," which will ask the question, "Is race only skin deep?" It got me thinking, because you see, every black man I ever planted with or heard about in planting dressed the exact same way as Emmanuel - a way that, if I'd tried it, would quite literally have killed me.

Now, most of these guys were indeed African immigrants, so you could make the argument that they were used to being hot and miserable, but I am no Arctic fox myself. I was raised, you may remember, in the frickin' Amazon Basin. If there is a whitey out there who can take the heat, it has to be me.

Over the course of my treeplanting career I heard a lot of people argue that the African's clothes absorbed their sweat and then evaporative cooling kept them from slipping into comas and dying; but I tell ya: Ben, the Ethiopian I hired when I became a foreman, used to wear all those layers but with full rain gear over the top - so in his case, evaporative cooling wasn't even an option. There were no two ways about it: Emmanuel and his Continental compatriots were wired somewhat differently than I, so I could just go ahead and enjoy it.

On our drive north in the middle of the next summer, we stopped on the way at a friend's house in William's Lake for a bit of a swim. I gave Emmanuel another good-natured ribbing as we walked out onto the dock and started stripping down to our shorts.

"It's blazing hot out here and there isn't a cloud in sight, Emmanuel. Why are you wearing all those clothes?" I asked.

He wagged a finger at me and with a mischievous grin said, "You nevah know when eat's going to snow, Chosh. You chost nevah know."

"All right," I laughed, jumping into the water as he continued to disrobe.

"How ease tha wotah?" He called out. "Eat's note too coldt?"

"Great, Emmanuel," I answered, "just perfect. I'm used to pee-warm Amazonian rivers and this isn't bad at all."

I did not, however, take into account Emmanuel's physiology. He hit the water and was shrieking like a little girl before his first toe was even fully submerged. In fact, I am not even sure it ever did submerge, because I would be willing to swear in court that the man walked on water back to that dock and then - when he had stopped shrieking and hyperventilating - turned to me and my howling friends and with vehemence spat, "You, you, you, you deceived me, Chosh! This iss pore-secution!"

I wasn't sure if Emmanuel would ever forgive me for that, but two years later - my last summer treeplanting with him - we were showering in adjacent stalls when the camp's propane heater suddenly gave up the ghost. Emmanuel shrieked his ear-splitting shriek as the frigid mountain-stream water pumping in through the shower-heads just about stopped both our hearts. Gradually, though, his shriek morphed into that great, deep chuckle-drum of his and I heard him say, "You remembah that, Chosh? That day at William's Lake when you deceived me? Eh, heh, heh, heehh... thet was soooooo fawny!"

We stood there laughing, naked and dripping, pressed against the walls of our showers. Me and my black friend, Emmanuel, laughing and enjoying the good times our differences had made.

Over the years I made a few more black friends (far too few, in my opinion) and I have to say that while I don't really know the answer to that Discovery Place question - whether the differences between Emmanuel and I were merely the result of our differing environments - I am exceedingly grateful that the world is not a bland assortment of grays.

Blackish-brown is beautiful, and so is whitish-orangey-pink.
Labels: culture identity