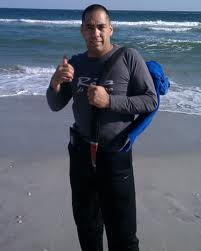 On Monday when Luis Togno sat down next to me at the Sucuri dojo in Waxhaw, North Carolina, I didn't really have any idea who he was. Sure, I knew that he was a thickset Latino wearing a Gi and that he was going to try to teach my son some moves; but if you had told me that he was one of the top-ranked martial arts experts in North America, I probably would have laughed at you.

I had met him twice before, and each time he had walked straight over and greeted me with a broad, gentle smile and a handshake that radiated warmth and - dare I say it - love. The first time this happened, I was a little flustered. I am always a bit uncomfortable meeting new people, and bigger men usually make me feel overly aware of my own diminutive frame. Luis was not tall, but he was solid; with that loose-limbed confidence with which life-long athletes seem to carry themselves. Despite this, there was something inherently non-threatening about the man, and I instantly found myself drawn to him.

My friend Zebulon is a teacher at the dojo, so the first time I met Luis, I asked him if he trained with Zeb. He gave a good-natured half-chuckle and said, "actually, I own the school." And then he shrugged and looked away, as if to change the topic - to perhaps spare me any embarrassment.

There was no presumption in the man. None. No banners proclaiming his exalted presence. No bowing and scraping from Zeb or the patrons. He was just Luis... a great guy.

On Monday when I opened the door and looked in it was just Luis, another boy and my son standing on the mat. True to form, Luis walked over and greeted me. As we moved into the dojo together, I nodded towards the tank-like men in the training video playing on the flat-panel tv-screen and asked if he thought he could take those guys. His smile faded just a fraction and he looked away. "Those are the Gracie brothers," he said, "I trained with them for eight years."

I could hear genuine affection in his voice for these godfathers of the sport, and felt for a brief moment the crassness of my question - the way it did a disservice to the core principles and ideals of Brazilian Jiu-Jitsu. Embarrassed, I sat down in a wire-mesh chair facing the mat and picked up a magazine written in Portuguese, pretending to understand what I was looking at. Luis, unperturbed, sat down next to me in his relaxed way. We talked of the school. Of life. His phone rang and even his ringtone was subdued, non-threatening: a low human voice, whispering urgently, "Psst. Hey, you. Over there. Psst. Hey."

He turned to me with an apologetic smile. "Today's been crazy. One of those days," he said. He got up, answered the phone, and then came back to teach my son, Mateo, to roll. He was gentle, kind, and playful. He put his feet on Mateo's stomach, locked hands with him, and brought him smoothly into the air, tucking him and rolling him onto the floor. Mateo loved it, but when after a while Luis tried to get him to do another exercise and Mateo claimed he couldn't because it was too hard, he shrugged and came back to sit next to me.

"I don't like to pressure them at that age," he said as he watched the two boys running around and tumbling all over the mat. "Just wait, though," he went on, "when his Gi comes he'll begin to associate this place with training, and not just playtime." Luis smiled at the boys' antics, unconcerned. Eventually, he got Mateo to try something else. The Thursday before, I had filmed Mateo training with Zeb. I thought about photographing him with Luis, but did not have my camera. It did not seem to matter.

Then yesterday when I picked Mateo up after work, his mother told me with tears in her eyes that Luis had been in a horrible wreck, that he was on life support, and that it did not look good.

Today, I stayed home from work to take Mateo to the doctor, and when I stopped by his mother's workplace on the way home to tell her the prognosis on Mateo's feverish past few days she, in turn, told me that Luis had died... was dead.

"Okay," I answered. "I'm sorry." I felt as though I should say more. I wanted to say more; but after all - I barely knew him.

At four-thirty today, though, I started to cry. I was sitting on the couch, thinking of Luis, and the tears suddenly began to flow. "Why you sad, Dadu?" Mateo asked, and I did not know what to say.

"You remember Luis?" I asked, crying.

"Yeah, yeah," he answered, his little eyes lighting up. My heart cracked a little. Something irretrievable leaked out.

I wanted to be real with my son. I wanted to tell him the truth. "Well..." I started, but I could not quite do it. "Something bad happened with Luis," I said, "and it's making me..."

"No-no," Mateo cut in, "nothing bad happened." He paused. "You want play hide-and-seek?" he asked. "That will make you feel happy, Dadu."

I nodded, unable to speak. I sat there, then, holding my beautiful boy and crying for a lovely human life cut so grotesquely short.

"Wail, for the world's wrong," wrote Percy Bysshe Shelley, and there are times when I feel that all I have within me is one long, keening wail. I have cried for death before, and for lives brutalized and diminished by the selfish cruelty that seems to be our peculiar birthright as humans. I cry, now, writing this, and I begin to feel that all the sorrow in all the world is connected: a vast, unstoppable flood of grief rising up and burying the cries of those who mourn and feel no comfort.

I have written of this whelming sorrow before, after the Haiti earthquake, and now, as then, I am overcome.

On Monday, I sat with Luis Tongo. Although he did not know me, he showed me love. Because he showed me love, I felt pain at his passing. And so the two - love and pain - became entwined. I do not understand this. I do not yet quite see the beauty in it. But I feel it may be there.