the man who had no heart 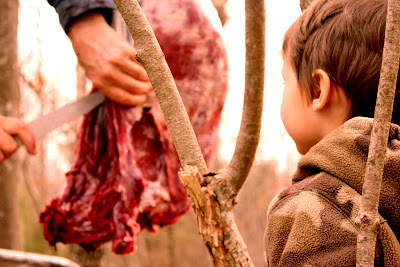 There was a time when I thought that maybe my dad didn't have a soul. And if he was not soulless, then I was absolutely positive he had no heart.

When he was just a little boy, both of my dad's parents got tuberculosis. They went off to a sanitarium and he and his sister went to stay at an aunt and uncle's house. They had a bit of a mini-farm, and as a result my dad ended up with farm animals running around in his bloodstream.

It wasn't too long after we were settled into our place on the edge of the missionary center in Yarinacocha, Peru, that dad started tacking together wire and wood and accumulating animals from all over the area. We had ducks, geese, turkeys, rabbits, goats, and chickens; and dad loved it. Not only did he get to reconnect with his childhood, but he also got to make his children connect with his childhood, learning such valuable lessons as, "How to Muck Out a Goat Pen Every Week" and "Getting Up Early Every Day to Feed and Water the Chickens."

"It builds character," he would say, and I was left to wonder (along with Bill Watterson's Calvin), "Why is it that every time I build character, he saves money?"

As unpleasant as it was, there was pleasure in it as well. There was something beautiful about spending a Saturday morning with my brother, filling burlap sacks with wood shavings from up at the Carpentry Shop and hauling them the quarter-mile home on our backs. Even as we complained about shirts full of itchy shavings, we both learned to appreciate the joy of a job well done, of the sinuous beauty of sweat and blood, flesh and bone at work.

It was hard, but there were unexpected gifts, too. Did you know, for example, that if conditions are right and you forget to muck out the goat shed one weekend, by the next weekend all that ammonia in the urine does something wonderful in the auger of all that dung and you get these beautiful, clear crystals the size of marbles? Amazing.

Truth be told, I was something of a wuss; and spent a fair bit of time trying to avoid work - sneaking off up into the rafters of the goat shed to watch spiders fight against insects that always seemed a little too big for those fine, delicate threads. My brother generally spotted me and made me come back to help; but despite the love-hate relationship I came to have with the work, I was unequivocal in my love of our animals.

You can understand, then, how I did not much appreciate my dad's very matter-of-fact attitude towards the little walking dinners I called my friends. Dad was raised by a matter-of-fact generation, a generation that understood the obvious connection between animals and meat on a plate... a generation that understood that there was really only one way to get them from point A.the barnyard to point B. our gullets.

My pets had to die.

So as a child I wept for the chickens and dreaded butchering day. I drew pictures of my dad as a cruel executioner, looming with glistening, double-edged ax over a guileless, smiling chicken. I left these pictures on his pillow in the evening, but in the morning they were magnetized to the fridge and the chickens still died.

Now, it never occurred to me at the time to protest all the way to the point of becoming a vegetarian. The truth is, I lived on a missionary base full of omnivorous, North American protestant evangelicals. There wasn't a vegetarian among them. I don't think I even heard of the term until I was maybe fifteen years old, on furlough. Even though my own heart was soft as butter, I still was hungry and liked meat; so I ate my fine-feathered and furry little friends. Later in life - when I actually had heard of vegetarianism - I kept right on eating meat. By then we had moved to a different house and no longer kept any animals, so I could easily put the harsh realities of some poor little creature's death out of mind as I chomped down on its tasty flesh. The hypocrisy did not bother me. Hypocrisy rarely ever bothers a hypocrite.

In time, I also learned a thing or two. I learned that my dad is one of the kindest, gentlest men that I know - a model of compassion. I learned that death is in fact a part of life, and that all creatures kill in order to live (With the exception, of course, of fruititarians, who only eat fruit that has actually fallen from the tree. Beautiful people, those fruititarians - even if they do only exist in the movie Notting Hill).

I do my best, these days, to buy organic, free-range meat, and I try to eat more fruits, grains and vegetables. Sometimes, I even think about "converting" to vegetarianism. But I don't. Because I am still a hypocrite. It is a harsh, cruel, and often unkind world. Sometimes you just have to make the best of it, and hope to create more than you destroy.

This morning when I got into the car to go pick up my son from over at his mother's, a deer staggered off the lingering snow on our driveway and back towards the road where she had recently been hit. I did not see her until I was rounding the corner towards the road, so I stopped the car and got out. By that time, the deer had slumped back down to the ground, and I saw that both her hind legs were snapped just about off, right below the joint. She was obviously terrified and in horrible pain. It reminded me of the deer I had seen killed by a minivan in front of me just this past year as we were coming home from a soccer game. As before, I felt heavy with the understanding of my complicity in the high-paced world that had brought this deer to this place, panting and trailing blood, in front of my home.

I turned and saw my dad walking across the acreage. "Dad," I yelled out. "There's a deer over here and she's hurt pretty bad."

As he came up beside me, the deer struggled up and, again dragging her hind end, jerked out into the far lane and lay down. The road in front of our home is an old highway, curved and fringed by trees. I could hear cars coming from both directions, so I turned away. "I can't watch this, dad," I said, "I just can't."

I waited for the inevitable crunch, but it did not come. The car in the close lane zipped by at full speed, but the beat-up white pickup going the other way slowed, stopped and waited. The driver looked at the deer, which half-rose and rolled off the road.

He tipped his hat and drove on, and dad went to get his sledgehammer as the deer stumbled across a field of grass and into some bushes. I jogged back towards my shed to phone a friend whom I knew had a gun, but by the time I got back, dad had just about dragged the deer to the road. It was dead. In dad's free hand dangled the bloody sledge.

"Maybe you should leave it over there." I called out, thinking of the cars whizzing by and the possible legalities of the situation.

"No," he shot back, a sharp annoyance creeping into his voice, "I'm going to cut it up for the meat."

I crossed the road and took a bloodied hind-leg in my hand; and then my dad and I dragged the dead deer across the road, trailing blood. I tried not to look at its head, but as we pulled together, I suddenly realized why my dad had snapped at me - he did not like this any more than I did. He, too, was bothered by the senseless suffering of this deer. He, too, felt pain when he had to end its life. But dad was raised in harsher times, on the heels of the depression. His was not a sanitized world, where meat always comes diced and pre-packaged in styrofoam and saran wrap. His world was must less plastic, much more real. He, too, knew no vegetarians.

This, I thought, is why he never once made fun of me for my protest pictures or my moping on execution day; why he never, ever asked me to wield the ax.

This was a gift of my childhood: That dad, who did not enjoy killing, loved his family enough to do the butchering that brought meat to our table. And although he was as much a part of his culture as I am of mine, and could as much think of giving up meat as I could of giving up air, he allowed me to think those thoughts. He was himself, and let me be myself - let me think of him as a cruel, heartless man.

When I got home with my son from our detour to the grocery store, we stopped in to see my mom and after chatting a little I turned to my son and asked, "do you want to go see the deer I told you about now?"

"Yeah, yeah, yeah," he said, turning to his grandmother in excitement to tell her about the deer we were going to go see. "Your cho-cho figured you'd want to go see," she said to him, "he said it wasn't quite ready yet, but that was a while ago. It's probably all right now."

So out we went, and there was dad, carving away at the deer, slicing off large chunks of meat with a sharp knife. After my son had bombarded him with questions, and had asked to poke it with his finger, I looked my dad in the eye and said, "mom said you wanted him to wait to see it. Is that 'cause you wanted to get it carved up a bit and looking less, well... deer-like?"

He looked me in the eye. "Yeah," he said, his voice getting soft as he turned his gaze towards his grandson, "yeah."
Labels: food nature