the Dao of Jesus 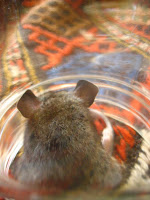 The rats have done it again!

I heard on the radio today that rat-testing has revealed that the hormone IGF2 "appears to play an important role in turning short-term memories, which may last only a few seconds, into long-term memories that can last for days or an entire lifetime."

This is, of course, awesome (three cheers for Templeton!), but there is an unfortunate downside. Those rats have also discovered that IGF2 causes accelerated growth in cancer cells. Bummer. While we can still thank the rats for dying excruciating deaths in laboratories so we don't have to, this unfortunately makes it unlikely that the FDA is going to give me the opportunity to reverse the effects of aging on my enfeebled brain by injecting a mess of IGF2 into my bum-muscles.

Worry not, however, that all those rats died in vain! Scientists (who are, of course, much more practical-minded than rats) have conjectured that by identifying the role of IGF2 in long-term memory-creation, they may be able to decrease its presence in the body in order to help war veterans combat "post traumatic stress disorder" (scienceze for "my country made me kill little kids and women and I feel rotten about it").
Isn't that awesome? Just take this pill, sir or madam, and all your bad memories go bye-bye. Forget the war ever happened. Forget the ugliness as you meander off into the eternal sunshine of your spotless mind with a big, smiling, soporific look on your face.
Now, don't get me wrong. As much as I enjoy making fun of this brave new world that science is offering to create for me, I do understand that PTSD is a frickin' ugly thing, and that there are times when medicine can help people heal by giving their malfunctioning bodies and brains a chance to rest a while, free for a moment from the incessant ravages of frickin' ugly things. There has to be a place for that.
What bothers me, however, is the mindset that immediately jumps to the cold calculations of science to solve deep, soul-level brokenness caused by the way we humans are conducting our business. As Aristotle acknowledged after pretty much inventing the analytical mode of thinking that underpins Western thought and pretty much all of our scientific endeavors, this cold, calculating construct only works for the realm in which "things cannot be other than they are" - that is, the natural world. For dealing with people, however, who absolutely can be other than they are, we need to be willing to approach things along a second road (thanks again, Tony).
This road, also constructed by Aristotle, is defined as "rhetoric." Not the aggressive, beat-my-opponent-over-the-head-with-how-smart-I-am rhetoric that many of us have come to know and love (and be manipulated by) in the political discourse of our day; but rather a gentler dialectic narrative, in which we come to the Other that is not us by seeing it not as Other at all, but rather as a holy entity - enlivened just as we are by the Divine - with which we can commune.
I am seriously muddling ideas together there, but what can I say? I'm an artist - I have the most fun when I'm ripping off a whole lot of people at once (so: sorry Buber, Buddha, Tony, Jesus, et cetera).
My point is that while analytical thought is important and necessary to inform our attempts to help those with something as soul-sucking as PTSD, our broader view absolutely has to be founded on an understanding of the sufferer's experience as part of a larger, human narrative of suffering and pain. You cannot ever science away that narrative with pills or serums or formulas, just as you cannot ever take that narrative and stuff it into the formulaic, syllogistic precision of systematic religion.
This is one of the things I love about Jesus. The dude didn't systematize anything, really - he said crazy stuff and told stories that upended the status quo. He told stories that drew people into the upending process and set them down on the far end with an imperative towards loving action that they had a choice to accept or deny. He did not stop there, though - he also showed what he meant by loving people, and working to heal them at the very level of their brokenness. I know I'm hobby horsing on this a lot lately, but it seems to me to be what it's all about. Jesus said, "I am the way," and (as I learned today) the Chinese translation of the Bible expresses the word "way" as dao, which means, literally, knowing the right path and taking it - the Chinese character combines the symbols for "head" and "foot."
So the Dao of Jesus, if I may put it this way, is to experience the story of love while living it together - something I am absolutely certain will never be crammed into a medicine bottle.
Labels: Jesus nature philosophy