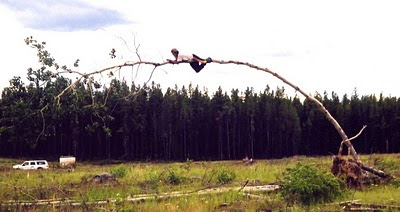 Could you do it? Could you cut off your own arm with a dull Chinese multi-tool if it was the only way to save your life?

As the credits rolled on the the movie 127 Hours, I once again asked myself that question.

Like most people in North America, I had heard Aaron Ralston's story shortly after it happened - how he had been trapped by a falling boulder while hiking alone and had to chop his own arm off to survive. It was in the summer of 2003 - my second year as a treeplanting crew leader with Silvaram Reforestation. In the rough and raw world of treeplanting - surrounded, as we were, by the dangers of an intense, manual labor job out in the Northern Canadian bush - Ralston's story was just the sort of thing that appealed to our machismo-infused lives. In a world of steep cliffs, dangerous helicopter landings, wild animals and nearly endless fatigue, it seemed entirely plausible that one of us might one day be called upon to rise to just such a challenge.

After shuddering to think of it and looking around at some of the manly brutes I worked with, I decided that I probably would not have "made the cut." I could remember clearly the time my foreman, Curtis, fell off a log on a mountainside and impaled his bicep on a sharp stick. After snapping the ends off, he radioed for someone to pick us up at the end of the day and drove himself three hours to the hospital. Over the years I saw a guy plant with a broken hip (Leigh), a broken ankle (Jo-Ben), and one time even watched world's most insane treeplanter (Nate) stick in a thousand trees in one hour while afflicted with giardia lamblia, a diarrhea-inducing gastrointestinal disorder.

While I had done a few stupid things myself - like climbing a leaning poplar tree until it snapped (pictured above, mid-fall), or punching myself (hard) in the gonads to lighten up a depressing mood in the eating tent - I had a long-running hate-hate relationship with pain and was fairly certain that in Ralston's situation I would have just wussed out and died.

By way of example, let me tell you about something that happened to my older brother, Jo-Ben, later in that planting season.

Jo-Ben had ridden a quad (all-terrain vehicle) to a huge cut block where his crew was working. The roads were so impassible that all the tree planters had to be flown in by helicopter, but Jo-Ben had brought the quad down oil-company seismic lines and up old, deactivated logging roads so he would have a way to move trees from one end of the block to another. As the sun started to go down on the last day there, the planters got their helicopter ride and Jo-Ben hopped on the quad to ride out.

Everything was going fine until about halfway back to where the trucks were parked, when an innocuous-looking puddle on a seismic turned out to be a sinkhole to China. Glub, blub, glub went the quad, and Jo-Ben was faced with the sickening reality that his motorized mount was stuck past the axles in thick, black ooze. He rocked the quad side-to-side. He revved it up really high and popped the clutch. He dug away ineffectually at the thick mud with a stick and wedged tree-branches under the front tires. Nothing worked. The suction-force of that mud was inescapable.

Jo-Ben sat down on a stump to ponder his options. His hand-held radio was dead, so not only did no one know where he was, but they weren't likely to find out for quite a long time - his crew would most likely be hitching rides back to camp in other vehicles. It would be a long, long walk out, and there was no way he was going to waste all the man-hours it would take to come back the next day with a few of his planters to lift the thing out.

He thought about his assets. The only things he had were his brains and a 3.99-meter plastic-encased wire with a loop on the end - a plot cord for judging seedling-density. And then it hit him... physics!

He dragged a log back behind the quad and then found a long, sturdy pole to use as a lever over top of it. After putting everything in place, he threw his weight down on the lever and watched with immense satisfaction as the back end of the quad schlooped up out of the muck. Success! he thought. And then he thought... now what? He couldn't hold it up forever, and although the quad was front wheel drive and he had those branches wedged under the front tires for traction, he couldn't both lever the back end out of the suction-mud and give the quad the gas necessary to pop it out of there. Or could he?!?

The Honda Foreman Forerunner has a thumb-lever for gas, located right below the right handle-grip. "It might just be possible..." he thought..

Jo-Ben set down the rear end of the quad, walked up, started the engine and put the machine into first gear. Then he made a lasso out of the pink plot cord and looped it around the thumb-lever, up over the handlegrip and back towards the rear of the quad. He walked back and put the end of the plot cord between his teeth. Then he levered the tail end into the air, craned his neck to pull his little gas cord, and whooped exuberantly as the quad roared free.

"I BEAT YOU!" Jo-Ben yelled, throwing both fists skyward in victory... and then awestruck amazement, as his Peruvian-rigged gas cord somehow got stuck and shot the quad forward another forty feet until with a CRUNCH it came to a dead stop, high-centered on a stump. His jaw dropped and his fists remained in the air as he realized he was right back where he had started. But at least, then, he knew what to do.

Over the years, I saw all sorts of ingenious solutions to impossible problems. I saw Mike-Guyver (Mike Penner) turn four broken quads into one absolutely denuded quad and three fully-functioning ones using only a pickax and an adjustable wrench. I saw cargo-trailer suspension-systems rigged with duct-tape and fresh green branches in a world where time was money and calling triple-A got you some sharp laughter and a dial tone.

None of this, of course, is anything like cutting off your own arm with a dull knife. My point, however, is that people are remarkably ingenious, and will generally do - especially when life is on the line.

The past few years have been, for me, impossible. I never, ever thought I'd get crap-kicked in the relational face the way I have and I never, ever thought I would be able to survive it. But here I am today, mostly smiling. I had a son and that was motivation enough, I guess, to wiggle my way through the Valley of the Shadow of Relational Death. Divine Grace stepped in and urged me to Live.