why I didn't vote (again) 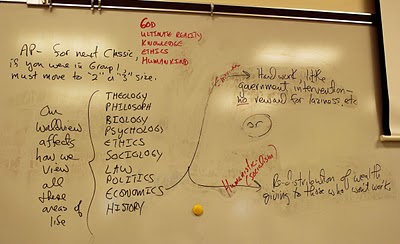 I guess it comes down to this: if you told me that by running full-force, face-first into a brick wall I would save the lives of six orphans, I still wouldn't do it - not even if it was six hundred thousand. Not because I don't care about orphans, but rather because your proposition seems to me to be not only illogical, but quite probably malicious.

The same with voting. Here in America where I have the distinct privilege to live (and I mean that), we have a two-party system that it my mind is basically just a one-party system made of schizophrenic, sado-masochistic personalities who would throw battery acid on their grandmothers for a few more fistfuls of power.

And yes, I am talking about Barack Obama and Sarah Palin, and whomever else you happen to idolize. I'm sure they're all fabulously nice people who are each right about a lot of things and at one point weren't willing to sacrifice a little truth in the name of political expediency, but show me a candidate who never trash-talked an opponent, nor approved a slanted, truth-bending propagandistic smear ad and I will start listening and perhaps even voting.

Maybe I am wrong. In fact, I am sure I am wrong, because I am sure that on a local level there are plenty of politicians who are too well known by their constituency to hide behind a veneer of fancy rhetoric and doublespeak - and contrary to what the rest of the world thinks, most Americans aren't particularly stupid or malicious when it comes to judging what's right before their eyes. What they are is manipulable, and the bigger the stage, the easier it becomes to murky up the water, villify your opponents, and convince the confused masses to vote out of what's easiest - fear and economic self-interest.

Don't believe me? Just see how far you get running on a platform that emphasizes humility and self-sacrifice for the greater good of the broader human race. Just try to get yourself elected arguing that we ought to significantly decrease our wealth and "standard of living" in order to advance the economic interests of the world's powerless, disadvantaged majority. Just try it - I dare ya!

At that level - the level of fear and selfishness - there is no nuance: just loud, angry yelling and the insistence that anybody who disagrees is an idiot at best and a villain at worst. I mean, just look at the above-pictured recent photo of a whiteboard from the wall of a private school.

In case you have a slow-loading computer or a tiny screen, I'll describe it for you: basically, it says that worldview affects a bunch of different areas of life. As an example in the area of economics, it provides two alternatives. First, for the "Christian" alternative, it describes "hard work, little government intervention - no reward for laziness, etc." Then, as the only other option, it describes "Humanistic (socialism)" as being, "redistribution of wealth, giving to those who won't work."

Now, to anyone at all interested in thoughtful discourse, this is the sort of politically-loaded malarkey that absolutely precludes the very possibility of useful dialog. You cannot portray the question as being a choice between two such polar and (I think) inaccurate opposites and expect those who disagree with you to want to continue the discussion. This is nothing out of the ordinary, of course - people have been claiming that God is on their side of discussions of policy forever, and in America the bravura of those touting this particular nonsense while claiming that they and they alone are "Christians" is quite well-documented.

Again, I have to point out the incredible lack of nuance. I personally consider myself a follower of Christ and want nothing to do with these sentiments. I do not think these views are indicative of what Jesus was all about at all - only that certain people have hijacked the language of Christianity in order to give a large chunk of the American public a visible devil that they can feel good about throwing stones at. They've gotten these people worked to such a pitch and tenor, in fact, that they're drowning out more reasonable, humble voices and dragging a lot of otherwise sane people along with them.

The other large demographic that can generally be grouped on the other side of the debate doesn't use religious language, but it does do the same bleedin' thing - so broadly and with such vehemence that even I want to go smash expensive electronic equipment in American megachurches (well, actually, I already kinda wanted to do that).

This would be a mistake, I think, because while I firmly believe that the person who wrote that was profoundly misguided to do so, I also know that it was probably written out of a desire to see things come out best for the kids, On a smaller scale I can disagree with his words without attacking the person(which I wouldn't want to do), but in the political arena (think circuses and MMA) there is no time or room for such distinctions. The political world is a polarized madhouse where you're either with us, or a reprehensible ingrate with nothing to recommend you.

I have a friend in Nebraska who tries very hard to humbly consider opposing positions and to get others to do the same. He does it over and over again in web-based discussions and over and over again I see both sides of the argument totally ignoring his requests for dialog and instead regurgitating ugly partisan rhetoric all over him, and each other.

I wish him the best in his noble, doomed attempts; but even if good, clear information was available, I'm still not going to join him in his quest. Sometimes if you don't want to be lumped in with the swine, you just have to stay out of the pen.
Labels: culture Jesus politics religion