the silence that speaks

This past Sunday, Dan the Jungle Man picked me up in a canoe-topped Ford Ranger and together we drove down to Lancaster, South Carolina. After grabbing a rotisseried chicken at a megastore, we drove out of town a couple miles and then off down a short, graveled road to an unkempt boat-launch under a graffiti-splashed bridge that spanned the river Catawba, where we launched Dan's old, battered aluminum canoe.

He had only been able to find one paddle, and as it was the new one he'd hand-crafted from a piece of mahogany he'd brought back from the last trip he'd taken to Peru, Dan did all the paddling as I sat at the front and played with my new camera. I offered to take my turn at the stern, but for Dan (who routinely traveled by canoe for days without stopping) this little jaunt-for-a-few-hours was a leisurely chance to stretch and get a little blood flowing.

As we rounded the first bend, the noise of the road dropped completely away and a wild, rarely-broken stillness settled all around us. Except for the occasional hum of a distant airplane, for the most part the only noise came from the rhythmic pwopp-fwssss of the paddle and the indignant hollering of the odd territorial blue heron. It was quieter, even, than the Amazonian lake where we both were raised, and I remarked to Dan how strange it was to drop so quickly from the sound and fury of suburbia into the gentle folds of the countryside. Strange, wonderful... and strangely unsettling.

It had been five years since I had last floated out onto open water - far, far too long. I was practically raised on a lake in a dugout canoe, with a dinged, hand-cut wooden paddle in my hand. I missed the idyllic hours of my youth - the long, slow afternoons with nowhere to be and nothing to do but drift aimlessly on the warm, placid waters of Yarinacocha. More than that, though, I missed the sense of connection I had once felt to the elemental vigor of the earth, and this trip up and down the Catawba reminded me sharply of my growing disconnect from the place-sense I had once glimmered as a child.

After leaving the culture and climes of my youth, I had resolutely plugged myself into what I accepted was to be my new reality. But as I attempted to forge a replacement for the place-sense that I, like everyone, had breathed in with the air of childhood, I found myself creating a new one too strongly shaped by the concerns and commonalities of the paved-over world of suburbanite North America.

Dan and I talked of this as he paddled steadily up the river, lamenting the changes but enjoying the moment. Later, he and I sat on a rock in the river, eating our chicken and the towel-wrapped, still-hot potatoes Dan had boiled in the morning before heading out. Connected, in this way, to such moments from our shared past, I began to feel again the endless yearning that had once been my lot as a newly-uprooted jungle boy living for the first time in the endless drizzle of the Northwest.

Was it only me - a result of my unusual, fractured upbringing? Or could it be possible that a great many of the ills and ailments of the broader American culture could be traced to just this same yearning to reconnect to something slower, calmer, and more steeped in the life-roots growing deep into the soil? I wondered if perhaps alienation from the earth and the subsequent easily documentable destruction of the land that this lack of relationship engenders may very well point to its own solution.

What if we just stopped? What if we turned off the TV and walked, slowly, to a friend's house? What if we did not tell them we were coming, and what if as we went we breathed deeply of the unfiltered air, living slower and noticing, as we did, the damage that all our speed, convenience and efficiency has done - not just to the good earth that sustains us, but to our very souls? What if we were all to grab a paddle and a canoe, and work our way up the river into the silence that speaks? 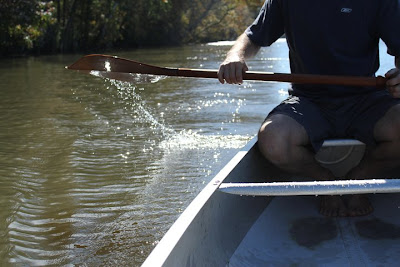