There are some things you never notice about yourself unless there's an outsider around to point them out. For example, I was at my brother's house last year and his wife happened to walk by the bathroom and burst out laughing when she saw me brushing my teeth. She said, "ha, hah! You and Jo-Ben both do that."

And then she said, "you both rinse the toothbrush, suck the last bit of water off it, spit it in the sink, and then put the toothbrush away."

At first, of course, I thought she was crazy. I mean, everybody does that, right? But then I started noticing that they didn't do that, and that my brother and I do, in fact, share a bizarre little peccadillo.

My point is that if you really want to know how weird you are, invite a stranger into your life... or even, a lot of strangers. All of them, in fact. That's what I did this past year when I signed up for couchsurfing, which is an awesome little social networking site that does just what it sounds like by allowing you to stick it to The Man (you know, the one who owns all those ridiculously-priced hotels) by opening your home and your couch to total strangers.

Don't get me wrong, it isn't as intimidating as it sounds. There are a variety of safeguards to make sure you are not going to wake up in the middle of the night missing your eyeballs or your cat or your favorite pair of underpants - but once those safeguards are out of the way, you are free to have a wild and ka-razy time with whatever random travelers happen to pop in.

Last weekend, I hosted my first couchsurfing guest. His name is Anders, he's a Swede from Switzerland, and by some freak shift in the molecular structure of the universe, I happened to get lucky and actually beat him in a game of chess. Over the two-and-a-half days he stayed with me, we had a great time doing a variety of North Carolina things and Anders - who was driving down the East Coast from New York to New Orleans to see, as he put it, "a non-Hollywood America" - drove away satisfied.

We went to a Peruvian restaurant, played Tennis, walked around the metropolis of Waxhaw, shared recipes and meals, and (irony of ironies) managed to get Anders a role as an extra in my friend Austin the Actor's latest short film. That's us, pictured below with the Assistant Director and one of the Production Assistants. Anders and I are the guys in the striped ties. Nifty, eh? 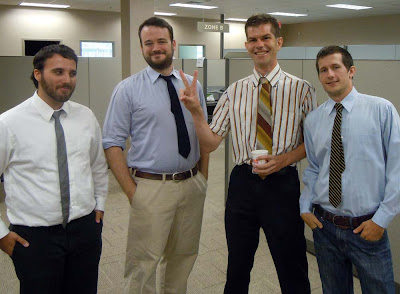 The best part, though, was sharing great talks on just about everything we could think of - from home ownership, to abortion, to swiss cheese. It was super-illuminating to hear one Swedish-Swiss guy's perspective on the world and my life, so I thought I would make sure I got on here to tell you to get up off your own couch and go make it available on couchsurfing.com.