I would glance over at hungry little eyes peering through the windows of a restaurant where I was eating and I would not think, "oh, well... now isn't that just a tribute to the value of my home country's solid Protestant work ethic and a testament to the detrimental effects of a government mired with corruption and un-American policies?" Nope, I would not think anything of the sort. Instead, I just got confused. And when I followed our garbage truck out to the dump and watched children picking through my garbage looking for something they could use or sell, I got even more confused. In my naiveté, I thought it unjust that they should be starving and desperate while I had regular, balanced, nutritious meals and new presents every Christmas.
They had done nothing to deserve this, I thought, and it bothered me. Not, of course, to the degree that I would make a stink and insist that we buy our meals and take them directly out to these children, instead of just saving the scraps and bringing them out in a bag... you mustn't go overboard, after all. It did bother me, though. It was just not right.
Now I am thirty, though, and know better. 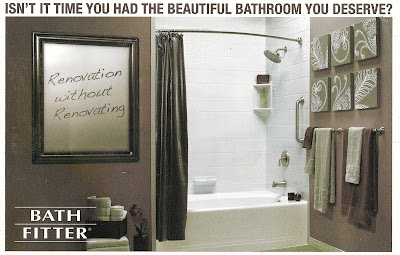 Last week the above-pictured flyer came in the mail, reminding me that I deserve to have a bathroom that is both functional and beautiful. I looked at it and was reminded that despite the fact that roughly 2.6 billion people in the world lack access to adequate sanitation - which leads to the transmission of diseases that cause a great many millions of them to die in pain - I, at least, deserve to have a beautiful bathroom conveniently installed in my home with a minimum of fuss.
Why, you ask, do I deserve this? Well... for being me, of course.
A long time ago -- long before I was a thirty-year-old man with everything figured out -- I was a little boy who was very confused. One of my greatest sources of confusion was the incredible wealth of my family, as compared to the abject poverty of some of my friends in the community that surrounded the missionary base I lived on in Peru, South America.
Labels: consumerism