why all cities should be drug into the street and shot 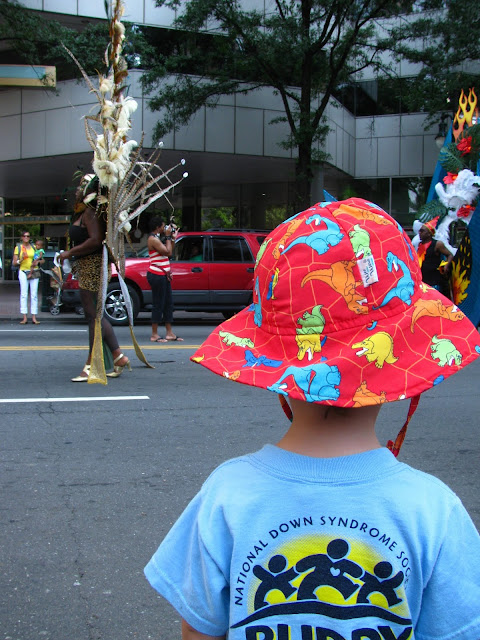 It has been two days since "the incident," and I think my seething rage has dissipated enough that I can sit down and write about it without demolishing my keyboard with angry keystrokes.

This past Saturday was the Annual Caribbean Festival in Charlotte, North Carolina.

Waxhaw, the little town near which I live, has a Fourth of July parade every year, but this parade has degenerated into an overblown advertising campaign - a long succession of vehicles with company names and logos plastered all over the sides - so I thought I would take my son in to see if perhaps the Caribbean Festival Parade was any better.

Let me say up front, as a way of qualifying my rather extreme post title, that I do not hate cities. I just hate how they make me feel - which is a little bit ignorant and a lotta bit lost. I know I would feel different if I had spent more time in my life getting to know them, but I haven't - so this visit was no exception. I knew roughly where I wanted to be and found it without too much confusion, but the difficulty started when I tried to find a place to park the car.

First, I missed seeing a "valet parking only" sign and began to unload in front of what I later discovered was a hotel. The valet (bless his little white-boy heart) was nice about it and didn't try to make me feel stupid, so I loaded all my stuff and my son back into my air-condition-less car on this hundred-degree day and started to go around the block, looking for a spot. Nothing remotely free presented itself, so I pulled into one of the public parking lots by a sign that said, "Parking: Six Dollars" and drove up next to the ticket dispenser, which informed me that it only took cash, and that the cash it wanted to take was six dollars. I had five.

Back around the block I went, pulling at last into a multi-level parking garage past a sign that said "First Ten Minutes: Two Dollars. Two Dollars for Each Twenty Minutes that Follows." There was a booth there at the exit and the rate seemed tolerable, so I drove around and around up to the third floor of the mostly-empty garage (that should have been my first warning sign) to where there were finally some un-reserved spots. Parked again. Unloaded. Walked down the stairs and up the street in time to be really early for the parade, which was apparently running on a Caribbean timetable.

An hour later, my son and I were back at the car. We didn't get to see the whole parade, because we were trying to make a lunch appointment with Austin the Actor - who starting next week will be Austin the Actor/Writer/Director on that short film I mentioned a while back. I didn't have a cell phone to call and tell him I was running late, so I was in a bit of a hurry.

At the gate, I discovered that there was no attendant on duty. After a whole lot of confusing dialog about blue and white tickets, the disembodied voice over the intercom informed me that my white ticket didn't matter and it would be ten dollars, which I would have to pay cash. I told the disembodied voice that I did not have ten dollars, and it informed me that there was an ATM machine up on the mall level. Around and around I went, back up to what looked like sort of a mallish level, sweating all the way. I parked, unstrapped my son, and went through the outer glass doors... to find that the automatic inner doors were refusing to open. After standing there for a few seconds feeling stupid, I put my fingers in the crack and pried the doors apart. The place seemed completely vacant, but a secretaryish-looking woman with frizzy hair materialized and directed me to an ATM machine, which informed me that it could only give me money in increments of twenty dollars.

I punched in my PIN, unhappily paid the two dollars and fifty cents banking fee, removed my twenty dollars, went back out to the car, strapped my son in, and drove sweating around and around and around - back to the unyielding barrier at the exit of this venus-fly-trap-of-a-parking-garage that I was beginning to hate.

This time, I noticed that the cash slot had a little sticker over it that said "exact change only." A "blue ticket" customer was walking by right then, having just parked his sports car right down by the gate. I asked him if he had change for a twenty, which he didn't. I thanked him and got back on the intercom with the disembodied voice, which said, "here's what you're gonna have to do. Go back up and park your car on the appropriate level. Then go down to the street and walk up to the store on the corner. They'll make change for you."

At this point, as you may imagine, I was more than a little bit frustrated. "Are you serious?!?" I said. "I just went all the way up to the mall level like you told me and now I am really, really late for an appointment and you want me to walk up the street and make change?"

"Hey, man," the disembodied voice shot back, "I'm just trying to help out here. That machine will take your twenty, but it ain't gonna give you no change."

At that point, I was too hot and frustrated to care. I muttered something under my breath, jammed my twenty dollar bill into the slot, and drove into the street; having just paid Twenty-Two Dollars and Fifty Cents for one hour of parking. I managed, somehow, to make it to the restaurant only fifteen minutes late. Austin wasn't there.

Utterly defeated, I strapped my sweaty little boy into his car seat, spritzed him a few times with water from a spray bottle, and handed him a Nalgene with a huge frozen chunk of ice in it. I pointed my car away from the city and drove South, back to the comfort of a land where all the parking is free.
Labels: culture