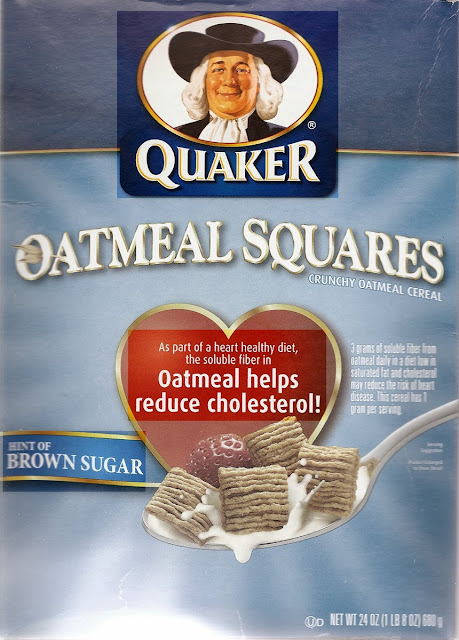 I used to really like that jolly-looking, chubby-cheeked Quaker Oats guy. Reminded me of Ben Franklin... and he invented electricity, right? Plus, there is that whole, "Quaker" connection. I am not really sure what exactly a Quaker is, but it sounds sort of Amish. So taken together, that must mean that friendly, intelligent, back-to-the-earth type people must have made this "Oatmeal Squares" cereal I like so much. The box says they have been at it for 130 years. I can just picture this guy... still out there in Pennsylvania somewhere, grinding away at those oats in his old, horse-powered mill.

For years I thought that way. Then last week I actually looked at the box and started to reckon. I surmised from the painted portrait that Mr. Quaker dude doesn't even exist - let alone have anything to do with this cereal. I saw how they made the "oatmeal helps reduce cholesterol" part really big to de-emphasize that it is actually the soluble fiber in the oats that, as a part of a healthy diet, can (as in, they might, if you exercise a lot, too) help reduce cholesterol. Finally, I noticed the phrase, "hint of brown sugar," which, let's face it, doesn't mean anything. So I looked at the ingredients, which as we all know are listed in order of percentage, from greatest to least. So let's see what we've got: "whole oat flour." Yup, looks about right. Next, "whole wheat flour." Still good... no complaints there. But next we have... what's this... "Brown Sugar" ?!? And then right after that, "sugar" again?!?

WHAT!?! I thought they said a "hint" of brown sugar. That doesn't make any sense... oh, no... wait... it does. See, the word "hint" is absolutely perfect. It sounds as though they are saying it only has a little sprinkle of sugar, while in reality the dictionary definition is "a covert suggestion or implication; an indirect allusion," which, as we can clearly see, has nothing whatsoever to do with quantity. So what we end up with is your typical nasty, sugar-saturated cereal loaded up with all sorts of preservatives and our dear old friend the ubiquitous and ridiculously toxic "yellow number five," packaged and presented as a health food cereal. I love it! Or rather, I did love it, until I started thinking again.

Thinking. Dangit, dangit, dangit! It's a curse, I tell you. Sometimes I just hate it, especially when it means that I now have to go to the store and actually buy raw oats and nuts and suchlike and start making my own granola, which not only makes me weird, but also a little shorter on time than I was yesterday.

Except... except for Barbara. Thank God for Barbara, who unlike that Quaker guy has got to be real and makes an almost-identical-looking food product that tastes just as good and is sweetened only with unsulphered molasses (poor little moles) and has only about half the ingredients, none of which are preservatives or yellow number five. Golly, this is great! Or... maybe not great, but at least better... because the sugars are still there, only in a different form.

Dangit... I don't wanna be a hippie! I like cutting all my hair off and taking a shower. Dangit, dangit, dangit. 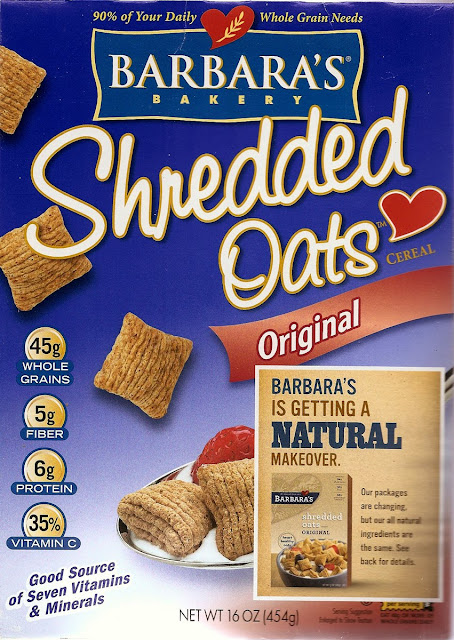