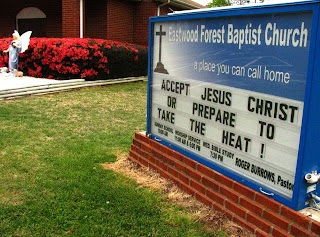 A long, long time ago there was a big fellow by the name of Thugh LipSmacker, who lived in a large cave by a swift stream with a great many other people, all of whom were very, very dirty.

Thugh had dark hair, a squashed, squat nose, and a barrel chest that he was always defiantly puffing out to disguise the fact that he was pretty much afraid of anything he couldn't bully: the stream, the animals in the forest... even the other people. What scared him more than anything else, though, was the suspicion that at any moment the others might discover that he was afraid. Big men cannot be scared.

All Thugh really wanted was for them to love him. He was terrified that if they knew what he was really like, they would kick him out of the cave and he would have to wander the world alone. He was a big man, after all, and big men (like small men and medium men) hate to be alone.
Then one day, Thugh made an important discovery. He realized that everyone else was just as scared as he was. It occurred to him, then, that if he could expose their fear before they could see his, he would be safe. He would have power over them, and then they would have to look to him for love. So he began to tell stories. Every night in the cave by the light of the smoky fire, he would tell them a story in which horrible ghouls and spiny mastodons and sabre-tooth swamp-rabbits lurked behind every tree and rock, waiting to disembowel them and use their body parts for castanets. They believed him - partly because he sounded so sure of himself, but also because they knew that there were, in fact, things that went bump in the night.
Ugh became a predator before a crouching, cringing prey. They listened as he spoke these gruesome tales in his singsong voice, and their eyes grew wider until he imagined he could actually smell their fear. He tasted it and built it, gradually, larger and larger. In these spellbinding moments, he wasn't afraid of anything. No, he imagined that he was completely in control of the entire world (which, of course, he was not). And just when the others began to quiver to what he knew was a breaking point, he crescendoed the story not in their gruesome deaths, but by offering them a savior... himself.

"Yes, the ghouls and mastodons and swamp-rabbits are real," he said, "but I know how to defeat them - I, and I alone. Stick with me (and give me the choice cuts of meat and your finest women) and I will make sure nothing bad ever happens to you."

The more he said these things, the more he believed them. He was still very, very afraid, but the stories made him feel powerful, and he began to equate power with fearlessness.
Thugh's plan worked exceptionally well. He eventually got everyone else to do all the hunting and cooking and protecting, while he stayed in the safety of the cave, telling his stories. He became rich and fat, by caveman standards, and sired a great many belligerent, squalling little children by all the women of the cave. This bothered the other men (and the women, of course), but they were too afraid to do anything about it.

Time wore on. Things changed. Thugh began to notice a disturbing trend - those very same scared people whom he was manipulating soon got used to their fear... to the point where his stories stopped working. He began to notice that his power over them was diminishing, and that they were growing restless. This scared him immensely, so he invented other, newer fears. He built them and built them.

Time wore on still further in this manner, and Ugh grew old. Looking to the future, he began to train some of his sons to tell his stories. At long last, Thugh Lipsmacker died, but by then the fear was so widespread that there was no stopping it. Each generation the system of fear grew a little bit bigger; because no matter how scared Lipsmacker's descendants made the other people, they always got used to it. They always began to wonder why they kept sacrificing the choice meats and healthiest women to the whims of their supposed protectors. New stories had to be invented, refined, and re-shaped to fit the changes that began to happen in the world. They had to be made into systems, and other people had to be appointed to maintain those systems.
Other story-tellers came along, wise men and women who saw what Lipsmacker's descendants were doing. They were afraid, too, because the world they lived in was, in fact, a very scary place. They were more afraid, however, of the Lipsmacking lies - lies that were growing so fast that it seemed they were about to swallow up the truth itself. These new story-tellers tried to counteract the lie-stories with tales of their own, truth-tales in which the people became their own heroes by learning to face their fears and love each other without trying to control everything. There had to be something more, these stories suggested, than just the ever-growing fears of the Lipsmackers. There had to be an uncontrollable truth that was bigger than the stories that people could tell.

A few listened. For most, however, it was impossible. The Lipsmackers they could see and hear, but this hope - this invisible faith that the other storytellers were trying to argue for - this was too scary to dream of. They were too afraid of being unloved - too cowed by a habit of fear to take the terrible risk of being the first to let go and begin to really Live. On and on it went, the battle of the storytellers, with lies and truth mingling and mangling to the point where no one knew how to tell them apart.

And no one knows if it will ever end, or how, but one thing is certain: the Lipsmackers keep smacking their lips... getting fatter. 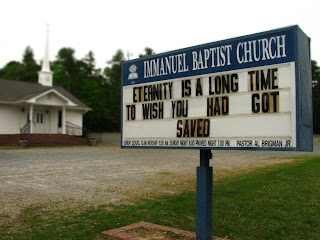 *Note: Any resemblance in this story to people who make church signs in Charlotte, North Carolina, is probably intentional.
Labels: faith religion