And The Sun Also Rises 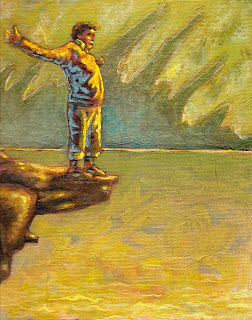 In my childhood Easters we would all gather on the Scott's sloping lawn in the humid almost-chill of the pre-dawn and gaze out through a gap in the jungle as a dull glow began to fill the eastern sky over the lake. Often there were mists licking the surface of the water and ribbons and shrubs of clouds that filled the expanses and set on fire with bits of light. Up front Uncle Willie "the wild-haired Pigeon Man" and Uncle Scotty warmed up their wind instruments at the slap-dashed together podium as latecomers trickled in and tried to find places for their blankets and lawn chairs.

Then, as the sun began to peek through the trees at the far side of the lake and to lift its glowing, orangish arc into the morning sky, a choir of men would call everyone to order and Uncle Willie would put down his trumpet and he and Mr. Smith with his wild-eyed singing face would raise their voices acapella and with chests out and fists pumped would launch into a glorious rendition of "Up From the Grave He Arose," as around a hundred and fifty congregants tried to croak along.

Some were hardly awake. Many of the children were still asleep. But still others gradually exchanged the bleary eyes of sleep for a look that reflected the mists falling and fading into the lake. Their eyes began to glint as they contemplated the central, glorious mystery of their faith.

And there, beneath the spreading limbs of a giant tree filled with the rustling wings of huddled birds, we all glimpsed together for the briefest of moments the creative glory of the universe. The sky and waters and all the crazy panoply of jungle colors and birds and life seemed to be lit for a moment with a transcendent glow, picking us up with them as we, too, rose on the wings of the dawn to greet the central, glorious hope we yearned for in the idea that we, too, were resurrected from our ugliness and despair.

I today - a cynical, jaded, saddened and uncomfortable part of this whole mess called "Christianity" - want to look back and judge that moment for its failures and follies. I want to, but find instead that once again the tears come to my own eyes as I yearn back to a place and time when everything was illuminated and united in one, big, glorious hope. For it is in the travesty of it all - the mystery and the insanity of the instigation of this upside-down kingdom - that I sit here today alone in the church of my own office, watching the sun rise and light the oak trees outside my North Carolina home. It is here, in the imperfection and brokenness of my lonely vigil, that I once again believe that there is life beyond the brokenness, and that the resurrection is living on, now, in me.
Labels: faith