In Defense of Walmart (sort of) 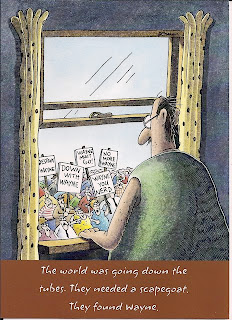 I'm going to risk the WROTH of Larsen by yoinking this panel of his off the internets and stapling it to my page, because it's always been one of my favorites and I think it perfectly says what I'm about to write about.

Now that the picture has said a thousand and twenty-nine words, it's a lot harder to justify my exposition, but let's just say that I think maybe a bit more could be said to link the title of this blog post to that panel.

Here's a little quiz. Read the following statement and circle one of the options below : Walmart is evil.

If you are like most of the people I call friends (and not just in the "facebook" sense), you probably circled "a", "b", or "c". Walmart is a huge corporation. They buy the cheapest stuff regardless of how it was produced or by whom, and although they're bajillionaires, they do not generally profit-share with their employees. They are monstrous, impersonal, and the sales workers generally seem to be wandering around as confused as the rest of us. We can do much, much better, right?

I have started to wonder, however, if that really makes them evil. It is easy to call them evil - as is evidenced by numerous documentaries and countless internet rants dedicated to just that purpose. But even though we'll say Walmart is evil, when push comes to shove most everyone I know (including myself) will, from time to time, shop there when they think that Walmart has the Best Buy. And Walmart does sometimes, on the rarest occasions, do good things like promote healthy food.

So what's with all the yelling? Do we merely lack the conviction to live out our principles, or is the "Walmart is Evil" platitude not a principle at all, but rather a defense mechanism? That is to say, do we yell at Walmart because it is easier than the alternative - which is to look long and hard at the socio-economic conditions that have made Walmart what it is, and at our own role in creating and sustaining those conditions?

The problem, I suggest, is not Walmart. While it would be wonderful to have some big corporate boogeyman out there to blame, the problem is us. And although it is important for us to fight hard against the exponential evil that corporations can do in the world with their igNoble Barnes of cheap stuff (because who among us can personally insure on our own that millions will perpetually teeter on the brink of starvation?), it is perhaps even more important for each of us to look long and hard at how our sanctimonious scapegoating keeps us from squarely facing our own guilt. We can build a better, less destructive world. We are a creative race with immense potential... but first we have to really, really want to change.

I guess what I'm saying is that Walmart's rubber, and we are glue. Some things stick to rubber, but angry shouting usually doesn't. Are we going to spend our lives throwing pebbles at easy Target(s), or are we going to figure out how to get the boulder our own backs?
Labels: consumerism