I Smell Sex and Boardwax

I had this perfect metaphor all worked out in my head, about how sex was like snowboarding. Real sex, I was going to say, is like snowboarding in the back country where the air is crisp and clear and there are no crowds and no clackety-clackety lifts and artificial terrain, so all you can hear in the biting cold of winter is the conversation of the wind with the trees and the whisper of your board as you float over pillows of un-touched snow. It is a conversation you have with the whole mountain, and your whole soul. It takes work to get there, and it costs dearly in time, planning and effort. You do it with another person, because it is safer and because a mountain unshared is a lost opportunity, but it is still very, very risky. Sometimes you put a lot of work in and get snowed out. Sometimes you think you're taking a good line and you end up having to slog your way out of some wet gully. Perhaps you even die, having failed to attain to the experience you desired. Nonetheless, there is no pleasure more exhilarating, no sensation more fine.

Then I was going to say that the fake sex of pornography was like going snowboarding at the resort, where everything is slick and polished and the illusion that risk is non-existent drapes over the whole thing like a fog. It all seems pristine, but the none of the marketing and merchandising can quite hide the ugly realities of a gluttonous hedonism that ships consequences off to China. It is crowded, and yet very, very lonely. There is little room for awe, and wonder is far too transient.

I had this all worked out and was set to write it up and post to this blog, and then a few hours ago my obnoxious friend Austin the actor got on his obnoxious little i-unit from the airport in Miami and wrecked the whole thing by obnoxiously saying that, no, pornography was like playing a snowboarding game on your computer.
He wrecked it, but I guess he also added another level of nuance to the metaphor. Because with a video game, all personal risk seems to be eliminated and you get to imagine that you are this superhero doing all these ridiculous things that aren't even possible, not even for Terje Haakonsen or whomever else happens to currently be the hottest thing on one plank. You are settling, though, for a cheap imitation of the truth, living in a false unreality where you do nothing but consume and all that is asked is that you pay for it with your chance at Real Life. You turn a blind eye to the horrendous, earth-hating culture that made your hedonism possible and live in your pathetic moment, blinders firmly stapled to the side of your head.

Snowboarding at a resort, then, would seem to more closely parallel the sort of pointless, stupid sex that stupid people have, where it is nothing more than a quick-and-dirty act of selfishness, slathered over with gold paint - the sort of thing you're better off doing drunk, so that at least then you will have an excuse.

Now, I have snowboarded at seven different resorts (non-metaphorically speaking). I have probably gone riding maybe about a hundred and fifty times. I have ridden terrain parks and half-pipes in good conditions and bad. At these resorts I have straight-lined at top speed down runs in conditions both icy and pristine, where snow was bulletproof or cotton-candy. I have even tried my hand at snowboarding video games. And it was fun, too. I enjoyed it, and while I was there I did my best to ignore all the things that I have mentioned.

Nonetheless, in the end it began to grow more and more empty, and although I do not regret the experiences - am grateful, in fact, for the often lovely moments I shared with wonderful people along the way - I find it hard to see myself going back to snowboarding if not for the sensual, dangerous, glorious reality of back-country riding. For it was on the few occasions when I did venture off-piste that I was able to glimpse, if only fleetingly, what it meant to be a human, riding the mystery of a mountain with love. 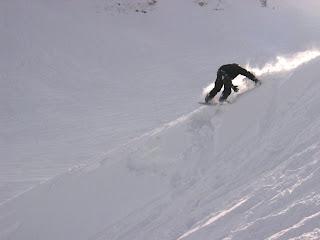