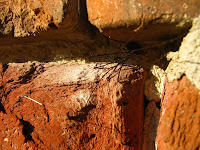 Barking Reed is, for me, a healthy alternative to trying to slam my head through a brick and mortar wall. See, I go to this thing at a place with some people, and the other thing - this "church" out of which the thing I go to has been spawned - has given our thing five hundred dollars to spend on people who need it. This week a discussion of how to use that money and something came up that made me want to smack a wall with my face.

My friend Andrew had suggested we might spend some of the money on the organization Kiva, which provides zero-interest loans to people in the developing world who have no other way to get help. It's a streamlined, well-run organization that makes it extremely easy for you to give a leg up to another human being... without treating them like a pity-object for the development of your own personal warm-fuzzies.

While you get direct interaction with the people to whom you are making these loans, you are only loaning them the money; so unless you're a real poop-stain, you don't get to think of yourself as the great white bwana bringing salvation from on high to the poor, benighted savage. It treats this person, instead, like a real live human being, a wondrous sack of person-hood worthy of your love and respect who, because of circumstances beyond your knowledge, needs some help. It is, I think, one of the best available options for trying to help those caught in the cycle of poverty.

Which is why it makes no sense to me that one of the members of our group would resist the idea with great vehemence. It costs us nothing (they have 98% repayment, which is superb for any lending institution) and helps to alleviate the horrendous rich-poor imbalance that afflicts the world today. Win-win, right? Well, not exactly. Not if you hold to the sacred-secular dichotomization idiocy of a lot of the nominally Christian population of North America.

Earlier on this blog, I linked to a Wendell Berry article that explores this idiocy in great detail, but to summate I'll just say that the idea is borrowed from Plato and suggests that there are two spheres, one spiritual and one material, with the material one being inferior, in a moral sense, to the spiritual one. The consequence of this idea is the belief that the physical world we inhabit is not very important. False and often arbitrary distinctions are made, and the "church" ends up teaching that you shouldn't really care about the physical needs of people, because those things do not really matter next to the crucial question of whether or not they say the right things and have their "heart" changed by a loving God who will otherwise burn them forever in an everlasting fire. It also leads people who hold this view (and there are a LOT of them) to think that it's okay to wreak havoc on the natural world because it, too, is of an inferior order.

I know this is why the guy at my meeting was against Kiva, because he actually came out and said it. He talked a bit about how he'd rather give the money to a Christian organization and then he said, "if we don't tell them a salvation message, we're basically just throwing our money away". So there you have it: if you help someone out in some practical way without giving them any explicit, propositional message about Jesus, you have done nothing. Or, to put it more crassly, if you give a starving man a meal without forcing him to sit through an explanation of some pamphlet, you are wasting your resources.

I didn't really know what to say to that. This is so far off-base from what I have come to think of as the core Christian message that I don't really know how to bridge the gap. In our group, this chap was in the minority. One person told him they'd rather give money to a competent organization than to give it to an inferior one just because it called itself Christian, and the point was made as well that Kiva is non-partisan and often works with regional churches and "Christian" organizations in the countries where it makes its loans. He argued a bit more, and in the interest of actually getting the money spent on Kiva, I suggested that we might pick a specific loan that was being done through a church - a proposition to which he grudgingly agreed.

He was in a minority in that group and the truth won out, but what has me wanting to bash my head against a wall is that I think our group is a bit of an exception. I was telling this story to my friend Ruteger* out in California on Monday, and he asked, "Well, isn't that just the basic premise of evangelical Christianity?" I did not have an answer, but it scared me to think that he might be right. It sort of fits my experience with the NAPEs (North American Protestant Evangelical) environment; which is weird, because it doesn't at all fit with the Christ depicted in the Bible, which these people so rabidly pretend to follow.

St. Francis of Assisi (a most excellent fellow) is quoted often as saying, "Preach the gospel at all times -- and if necessary, use words." A lot of people pay lip service to that idea, but for most churchy folk it is far too open-ended and leaves way too much up to God. To my mind, though, if you have to beat people over the head with the good news, it isn't all that good. And if you need to have control over over who gets to preach it, it can't be all that compelling a truth.

Loving other people is the good news. I think you get to share this news because God is love, but when you have to stop to scream that little nugget every ten seconds before you can proceed, it sounds to me a little bit like it is yourself you are trying to convince, which is a sign of self-obsession. Self-obsession may be a commonality in our culture, but it is certainly not something that Christ advocated. He said, rather, that you are lovely and loved; and can therefore stop doing all the silly, destructive things people tend to do when they feel unloved, and instead start spending your time loving other people.

The NAPEs cannot rule the day. The truth is bigger than their stupidity, and love will out. This is my hope and my faith. My sorrow, however, is that in their fear of what love demands they are denying it, and in the name of a sad caricature of love are bringing great destruction to this country, this people, and this world.

*"Ruteger" is actually "Mark" from the last "Anatomy of an Effup" post. He said he thought "Mark was kind of dumb, and that he'd always pictured himself as a Ruteger. He said this not because it was true, but because he likes making my life difficult. I asked him to think of a better name, and he's now mulling it over.
Labels: church community faith religion