I Am No Superman 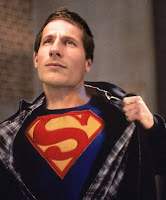 One of the many, many women on whom I have never put any moves is named Allison Mack.

I didn't know this when I met her, though. To me, she was just a random actor playing the role of "Chloe" on the TV show "Smallville".

I'd only ever seen one episode, but it was partly filmed a few doors down from where I lived at the time in Aldergrove, British Columbia, and it seemed like I was always seeing or hearing things about the show—like when my buddy "Chip" told me he'd come home and found one of the actors hanging out in his kitchen with his brother. That sparked off a whole conversation about how we should find where they film Smallville and kidnap the guy who played Superman and, like, make him eat lots of brownies or something (They were gonna be special brownies, though, so it's okay).

So when I saw a Craigslist ad for extras for film and television, I naturally thought, "Hey, I bet if I did that, I'd get called out to be on Smallville, and I could at least punch Superman in the face."

I rode my motorcycle down to the Extras Casting office, filled out a form, got my picture taken, and (surprise, surprise) Smallville was practically the first gig I got.

I jotted down the details, then rode my decrepit motorcycle at ridiculous o'clock in the morning out to the warehouses in Burnaby where they shoot a lot of Smallville. Although I'd left early, I somehow got lost and ended up arriving after my call time.

Nobody was around when I opened the large, exterior door and entered a dimly-lit corridor with another door at the other end. Along one side they had a couple of carts piled high with goodies, but I'd scarcely had a chance to hone in on the roasted almonds (hmm... almonds) when the far door opened and who should walk through it but Tom Welling, the guy who plays Superman.

It was just me and him, then, walking towards each other. I had on a leather jacket and was carrying a heavy helmet in my left hand. It would be so easy, I thought. I could just take a quick swing and run for it. If he chased me down... well, I had a helmet, right? Besides, I was late already and they had warned me at the casting agency to never, ever, ever be late—so I was probably finished as an extra. I might as well get a cool story out of the experience, right?

"Hi. I'm Josh. I once punched Superman in the face."

Except the closer I came to the guy, the bigger he got. I'm not sure how big, exactly, he eventually got: but to a five-foot-ten-inch slim/slender chap such as myself, it was plenty big.

I nodded a greeting and walked on by.

I went to wardrobe, got dressed, and after a while wended my way with the rest of the extras over to the set of "The Talon" (a coffee shop on the show), where I found myself standing by Tom Welling and Allison Mack. Maybe I was still smarting from my earlier wuss-out, but when I heard them talking about some social justice issue I can remember thinking, "Oh, yeah... right. A couple of millionaire actors pretending to care about something really important."

Judge, judge, judge... Jerk.
Not one of my finer moments.

One of the extras handlers came over and told me to go into a side hallway. He told me that when they said "Action!" he wanted me to come bustling out and pretend to talk to some people "with a lot of energy."

I stepped through the door, leaned against the wall, and started waiting. There, right in front of me, was a plastic rose. I picked it up. Someone walked into the hallway from the other end and leaned against the wall about four feet away from me. I looked over and it was the actress Allison Mack. She smiled at me. Then she glanced down at the plastic flower, then back up at my face. She smiled again and said, "hey."

That was it. All I had to do was smile, say "Hi," and make some weird comment about my probably-supernatural-television-flower.That would have been the normal, human reaction.

Instead, I went into turbodrive. I thought: "Wow... this is so cliche. A plastic rose? A smile? Come on. I can feel my life turning into a badly written soap opera. Plus, I'm married, and of course if I talk to her it will constitute adultery, and she'll probably ask me to go to her trailer to show me her collection of Amnesty International pamphlets, and I'll show her my online art portfolio and she'll swoon over it and I'll revive her with a kiss and we just can't have that happening, now, can we?"

I gave her a half-nod and a half-smile, which amounted to one whole dismissal. I looked away.

Now, contrary to what you may be thinking right now, I am not always an irrational idiot; but it was a split-second decision prompted more by instinct and fear than anything.

She was just being friendly to a Moving Prop in the wings—something her job did not require her to do. I could have honored that and had a nice chat. It would not have gone anywhere ridiculous, even if I'd wanted it to. Instead I blew it, promptly re-classified my bad behavior as virtue, and did my best to forget the whole thing.

A few months ago, however—shortly after my wife had announced her intention to end our marriage—I was browsing the interwebs and that random moment in the Smallville hallway came to mind.

The death of my marriage had forced me to think about the unhealthy ways I'd dealt with people and it suddenly occurred to me that I had been something of a poo to Allison.

So I looked her up on imdb. At the bottom of her bio she was quoted as saying,

"The most powerful way we can live our lives is if we stick within the community... when you come together as a community to achieve one specific goal, it's really just a beautiful thing."

At the time, I had been reading a book by Wendell Berry about the value of community. My curiosity piqued, I googled Allison and discovered she had a website... a blog.

It turns out this Allison Mack was not just some Five-in-a-Can TV Blonde, she was an artist and a thinker—an intriguing person. It is just possible, in fact, that if I hadn't been such a dink that day, we might've had a brief but interesting conversation. I might have even learned something.

There are moments when it feels my life's been a long succession of missed opportunities for real, human connection. In many small, less-glamorous ways than this, I have developed a habit of allowing my fears, anxieties and judgments to come between myself and other people.

One day, Allison posted an "art challenge"on her blog. She said she'd been been reading "A Writer's Book of Days," by Judy Reeves, a book which provides a daily writing exercise. She said she was going to do them, and posted the first. It didn't give a lot of detail. It just said you had to write a piece that had to begin: "__________ is the color I remember."

I took up her challenge, did the exercise, and posted it in the comments section—making, in my own small way, a contribution to the creative community she was sparking.

Here is what I wrote:

Light brown is the color I remember—the chocolatey brown of the amazonian waters where I first learned to swim, almost drowned, learned to love… to lust.

There is a smell these waters carry, a glorious musk compiled of tiny particles dragged from snow-capped alpine peaks, tumbled off smooth-worn rocks and pulled from mossy cliffs . Every year the rains swell the rivers and they reach out—first in fingers, then with broad sweeps of arms, laying a blanket of themselves over the whole Amazon basin and then sucking downstream tiny bits and pieces, drawing with them the stink of life and death and decay.

By the time this water flowed through the oxbow Peruvian lake on which I lived, the dank waters were so choked with this history that to an outsider they were nearly unswimmable.

For me, however, each time I immersed the warm waters wrapped me in their amniotic embrace and I emerged, at last, feeling new-born and alive. It was a Baptism of Being—and although I now live in North Carolina, swimming only very rarely in the sterility of chlorinated pools—every once in a while I smell something so earthy and primal that I am transported in an instant back… back to the light brown waters of my childhood.

This bit of nostalgia was one of the early steps I took on a path that's led me into full-time writing, and I now have a couple novels, a ton of short stories, and several produced short films and a feature film now out in the world.