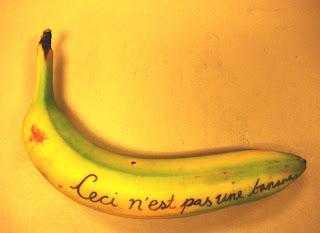 We are a story-telling race. But if we begin, having told our stories, to believe that in them we have created once and for all the story, then we are sadly mistaken and more than a little bit silly.

You and I are dust motes, flashing for a moment across the light beam of time. That flash is not all that is real, and I believe that we exist beyond and perhaps before that time; but the rest remains shrouded in darkness - a mystery so complex that we can only intuit a sense of the truth of it by submitting in childlike wonder to the invisible currents that move us on through and into the untold. Myths and stories, when spoken and heard with wonder, allow us to do this.

Stories are, therefore, of the utmost importance. They create our identity and our sense of self. As a result, one way to really freak people out is to tell them you think their meticulously-constructed worldview, or meta-narrative, is a myth. This is because they believe overly much in their capacity to understand the Universe, and have erroneously come to think of myths as lies.

I think this happens because they are confused about the difference between "facts" and "truth". Facts are important in everything we do. They are the bones of our lives and we need them to function. The neurosurgeon poking his finger around in our gray matter had better know what those squigglies are, just as an activist ranting about oppressive economic practices had better be able to back up those muckraking accusations with cold, hard data. Nonetheless, while facts are important, the truth is essential. It is the marrow of our bones, the blood that carries truth throughout our being and brings meaning to the madness.

Frederick Beuchner says in his book, "Wishful Thinking: a Theological ABC", that "The raw material of a myth, like the raw material of a dream, may be something that actually happened once. But myths, like dreams, do not tell us much about that kind of actuality. The creation of man, Adam and Eve, the Tower of Babel, Oedipus - they do not tell us primarily about events. They tell us about ourselves. In popular usage, a myth has come to mean a story that is not true. Historically speaking that may well be so. Humanly speaking, a myth is a story that is always true. [emphasis mine]"

This is easy enough to accept as an abstract concept, but becomes intimately painful when applied to our own, carefully-built story. We tell stories to make sense of the world, and we adopt meta-narratives in order to have a story that fills in for all our ignorance and keeps fear at bay. Perceived threats to our stories challenge the very essence of how we view ourselves - the core identity that we believe makes us lovable. So if I was to say to you, for example, that evolutionary biology is a myth, the degree to which you will react emotionally (if this is your worldview) will indicate how much of your identity is bound up in a lie, the lie of capital "K" knowledge.

To bring it closer to my own socio-cultural home, I would argue that if you claim to have worked out a meticulous and all-answering systematic theology of God, you have created a myth, a fairy tale which will have value only inasmuch as you do not stomp your feet and insist that it is entirely factual. I realize that this statement marks me as a bit of a heretic, but I am not the first. In his brilliant and seminal essay, "On Fairy-Stories", J.R.R. Tolkein argues that "Yet these things [mythology and religion] have in fact become entangled—or maybe they were sundered long ago and have since groped slowly, through a labyrinth of error, through confusion, back towards re-fusion. "

The path to re-fusion of mythology and religion is not to abandon reason. If we want to accept a mythological religion, we must abandon pride, and live instead with humble and child-like acquiescence to the grandiose mystery that is this life. An abandonment of reason, on the contrary, is what leads us to believe the idiotic proposition that finite creatures such as ourselves could ultimately explain an infinite reality and (perhaps most disturbing) an infinite God. As a result, we end up in the laughable position of arguing about whose fairy tale is the most accurate.

"The Three Little Pigs" and "Little Red Riding Hood" cannot both be true, we say, because in both of them the wolf dies. We then do logical gymnastics to show that one is false and the other true. "A wolf could never blow over a house of wood", we might argue, "it wouldn't have the lung capacity; and while it seems impossible that a wolf might wear a granny's night cap and gown, it is more likely than that he would be capable of climbing up onto a roof and squeezing down the chimney."

What this sort of argument utterly disregards is that neither story lines up all that well with fact (wolves don't generally speak English), and that that is beside the point. Fairy tales do not exist to provide factual accounts of The Way Things Are, they are there to point us to Truth - to provide meaning to an otherwise meaningless life.

As Buechner noted, one story might be more based on facts than another - as with, for example, the tale of Peter and the Wolf. I, myself, tend to think that the story the Bible tells of Christ is worth hanging my hat on. But given the finite nature of our human knowledge, it would seem to be wiser to leave our ultimate decisions in such matters to within the dominion of faith - informed by the facts, yes, but not inextricably dependent upon them. This opens us up to what Tolkien describes in his essay as joy. As he says it, "The peculiar quality of the 'joy' in successful Fantasy can thus be explained as a sudden glimpse of the underlying reality or truth."

That truth may be scary and very, very humbling, but it is the only thing that can set us free. If we insist on maintaining against all reason the illusion of a "factual" worldview, then we close our eyes to the timeless truth of an unlimited myth, wallowing instead in the petty indulgence of our temporal illusions. There is no recipe more sure for a life less extraordinary.
Labels: art faith identity religion