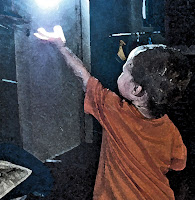 "Let those little kids come over here - don't tell them to get lost, because these are the sort of people who make up the upside-down kingdom I'm trying to tell you about!"

- Jesus Christ, paraphrased by me.


Maybe, for whatever reasons (possibly even some good ones), you get really angry when anybody tries to quote the Bible at you. I understand. I also get annoyed a lot of the time when people quote and misquote the Bible at me. I do think, however, that people who would like to burn every Bible they see share a problem with those who thump the Bible while screaming and pointing - they all tend to either not read it, or only read it selectively enough to convince themselves they have won the next argument.

The Bible-thumping screamers annoy me the most, however, because I grew up meandering around in the morass of that world (ha, ha... "morass" - a silly word that fits) and it's almost funny the sorts of things they very selectively ignore. Almost.

Like, say, the demand the Bible makes that we become like little kids. These folks use a sort of mental whiteout on this stuff, or transmogify the core message it into something decidedly un-mysterious, like: "isn't that sweet - gentle Jesus loves children!" Then they go right back to pompous adult behavior. But what does it mean to be like a kid, really?

Unfortunately, I don't have a particularly good answer for you, so I'm just going to finish up this musing with a couple quotes from people who, I'm thinking, know better.

"Sadly it is not only the force of gravity we get used to as we grow up. The world itself becomes a habit in no time at all. It seems as if in the process of growing up we lose the ability to wonder about the world. And in doing so we lose something central - something philosophers try to restore. From somewhere inside ourselves, something tells us that life is a huge mystery. This is something we once experienced, long before we learned to think the thought...

To children, the world and everything in it is new, something that gives rise to astonishment. It is not like that for adults. Most adults accept the world as a matter of choice.

This is precisely where philosophers are a notable exception. A philosopher never quite gets used to the world. To him or her, the world continues to seem a bit unreasonable - bewildering, even enigmatic. Philosophers and small children thus have an important faculty in common. You might say that throughout his life a philosopher remains as thin-skinned as a child."

“A child kicks its legs rhythmically through excess, not absence, of life. Because children have abounding vitality, because they are in spirit fierce and free, therefore they want things repeated and unchanged. They always say, “Do it again”; and the grown-up person does it again until he is nearly dead. For grown-up people are not strong enough to exult in monotony. But perhaps God is strong enough… It is possible that God says every morning, “Do it again,” to the sun; and every evening, “Do it again,” to the moon. It may not be automatic necessity that makes all daisies alike: it may be that God makes every daisy separately, but has never got tired of making them. It may be that He has the eternal appetite of infancy; for we have sinned and grown old, and our Father is younger than we.”