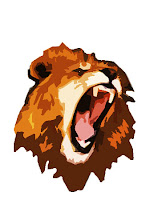 Have you ever had a "screamer"? Apparently you take some ice cream and you put it in a slushy and then the simultaneous cold and sugar rush makes you scream. It's a thing - another one of those things people do that, for whatever reason, I just can't seem to get. Like watching professional sports, buying shoes, or stopping my body's natural waste-excretion processes by blocking up my pores with aluminum-based antiperspirant.


I know, I know. That makes me an eccentric, screwed-up, stinky-man. What else is new? It explains some things, too - like why I get on here and shake my ineffectual little fist at the looming bulldozers, and why I say strange things at awkward times. I'm not special, I am just a weirdo.

It also explains why I'm not likely to turn this blog into a mondo-effective internet marketing scheme so I can quit my day job and sell prints of my paintings whilst firing off bi-daily cynical potshots at whatever bit of pop-flotsam that happens to drift by: I just don't care enough about what everyone tells me I ought to care about.

I do not generally write about:

There are two main reasons for this. The first is that I decided a long time ago that it was dishonest and wasteful to get angry about things that I am not willing to work to change. The second is that I have a sneaking suspicion that when I scream along with everyone else, the resulting noise makes it impossible for me to think in that meditative, hermit-in-a-cave sense I am trying so hard to cultivate.

See, screaming is noisy. I find it very hard to scream and listen at the same time - and to quote the title of a book/cd combo put out by National Public Radio, "Listening is an Act of Love". I want to listen, think and love; and ultimately to work towards those changes I actually can make. It is my belief that screaming deludes the screamer into believing that he or she is being marvelously effective, all the while diminishing the capability of folks on both sides of the issue to actually hear anything. There's just too much freakin' noise.

Blogs are usually about noise. They are about shouting loudly that everyone else is an idiot. I did some research on how to generate blog traffic and one of the oft-repeated techniques was to go on other, more well-read blogs and make near-slanderous statements about the content.

I'm all for being obnoxious and near-slanderous from time to time, but I say enough stupid stuff on accident that I don't need to go out of my way to fill the air with the obnoxious detritus rattling around in my brain. As the old saying goes: "better to keep your mouth shut and be thought a fool, than to open it and remove all doubt."

Still, there are some people who write thoughtful, measured things that, despite the vapid nature of the interwebs, still manage to convey the idea that they are not so foolishly convinced of their own rightness that they can't hear the voices of their detractors over the sounds of their own screams. So I will try to be one of them here, and point out a few things that are bothering me about all this.

First and foremost, I am disturbed by the status quo. The American government spends bajillions of dollars on stupid stuff, because they have bajillions to spend (now, where they got those bajillions, that's another story). Everybody who benefits from that spending does not like the idea of cutbacks to them, and most will do whatever weaselly thing they need to to ensure the cash cow keeps excreting money.

As a result, the health-care system is bloated and ugly and stupid - Canada spends about six percent less and while I can tell you (as a half-Canadian who just moved from there) that their system isn't perfect, it protects the poor a whole heck of a lot better than the American system, which seems to be mostly about getting more money for those who already have lots. For me, protecting the poor is super-duper important, and anyone who (intentionally or otherwise) keeps that from happening is, in my humble estimation, a big poo-poo head.

Second, I am uncomfortable with all this talk of "human rights", because as soon as we take the conversation into that vocabulaterial realm, we enter a world of power and control. "Rights" in this sense are the sort of thing that must be protected by someone or some entity powerful enough to enforce them on others. This works as long as the most loving course of action is within the game plan of the people with the most power. While I am aware that this is the way the world spins, I am just too much of a fruit-bat idealist to let that slide.

I am a HUGE fan of grace. I think we should care for the health of other people not because they have some inherent right, but rather because they are awesome, incredible creatures just like us, and I think their best interests ought to be ours. When we start screaming about "human rights", usually we're just concerned with one particular right for one particular group of people, like, say, white Americans living in my town - a demographic of ME. I don't want health care for poor Americans, I want health care for poor humans worldwide, because I love those who suffer and want them to be healed. For this to happen, though, there is going to have to be some sacrifice on this end. And who wants to sacrifice just so that one of my seven billion neighbors can be a little more healthy?

As soon as I share this opinion, however, I start realizing the endless digressions and qualifications I must make - like, say, about the difficulty of knowing what real health is, and whether our current pharmaceutical monstrosities are really providing it. Does health mean keeping unconscious people breathing in sterile rooms forever? I don't know. As Bob Dylan said, "everything is broken". The question always prompts more questions, which demand more silence, more thinking, and waaaay less screaming.