"the best thing about being stoned" 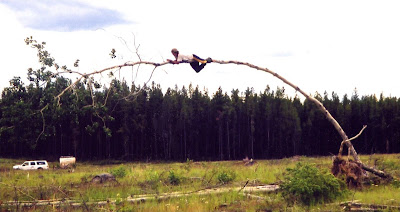 Once upon a time, a long time ago, a musician friend of mine looked at one of my paintings and ardently declared it to be "the best painting anyone has ever made, ever". Then he asked if I wanted to hear, "the best song we ever wrote, ever."

I, said yes, of course, so he and the rest of his band stumbled through a decently groovy tune which sort of imploded at the end into a cacophony of discordant notes and cymbal crashes. Then he looked at me through the purplish haze that hung over the room and with his typical impish grin said, "The best thing about being stoned is that everything just seems so stupid."

For some reason, the phrase stuck in my mind - possibly because it was so atypical. They had a rule about not coming stoned to practice or shows; and other than that one time, I don't think I ever saw it broken. It sunk in, and I ended up painting this picture:

and snatching his quote for the title. The painting is an exploration of apathy towards suffering - not a meditation on the relative merits of "the herb" - but one of my students told me Friday that I need to write about drugs and that picture seems as good a segue-way as anything.

Hmmm... This would be a lot easier if I had more personal experience to talk from; but the truth is, I have spent most of my life avoiding consciousness-altering drugs - even legal ones like sugar, alcohol, caffeine, and Tylenol. There are a three reasons for this. First: I am a boring-type person who generally only takes carefully-calculated risks; and the idea of screwing around with the chemical composition of my brain-juices never seemed to me to be a very sound idea. Second: I am a chicken-type person, driven by fear to avoid things I don't understand. And Third: I am a law-abiding-type person, too calculating and too scared to break a law if I can help it.

The result of these three things has been, so far as I can tell in my non-drug-altered state, mostly good. I have never suffered the awkward, embarrassing, or painful consequences that often attend this sort of behavior. I've never ended up walking down the streets of Vancouver in the middle of the night wearing only boxer shorts and a bicycle helmet. I have never come to consciousness floating around a lake in a life vest, wondering how I got there. I haven't made a succession of whoopies with a succession of possibly diseased strangers, nor pulled over to the side of a road to puke out technicolor slime, nor gone to work badly hungover, nor had any of the other lovely life experiences that some of my more drugventurous friends have had.

However, if I have missed out on the debaucherous lows; so, too have I never soared the lofty heights of brain-boggling. I don't know what it is like to be chemically high, so I am therefore a bit hesitant to write about drugs.

Normally I have two options when I'm ignorant on a topic. First, I can make a bunch of stuff up. I can tell you about this one time when I was all wigged-out on a cocktail of mescaline, cocaine and wine coolers and I ended up walking down a street in Guadalajara wearing only a leopard-print banana hammock and carrying a crudely-lettered cardboard sign that said: "El Gringo Bailara para el Tequila". This would be the much more entertaining choice, but it's harder to maintain... so I think I'll just be my usual pansy self and stick to the second option, which is to sidestep the issue and try to come at it at a bizarre angle that will distract you from my ignorance.

Um... so... er... I once climbed a fifty foot poplar tree that was growing at a slight angle, on the assumption that at some point it would bend over and deposit me on the ground. This was a sound theory, proved out by dozens of experiences in the South American rainforest, but failed to account for an important variable: the relatively brittle composition of deciduous trees in climates further from the equator. As a result of this mis-calculation, I was only three-quarters of the way up when the tree snapped.

In the picture above, you see me in mid-fall - just before gravity flipped me upside-down, so that I was zooming rapidly earthward with a large tree on top of me. Needless to say, I managed to avoid the logical consequence of this stupid behavior (death or a broken back); but the important thing is to pause right there halfway to the ground (a moment captured forever by a disposable camera held by one of the gathered treeplanters, for whose benefit this entertaining spectacle was being enacted) and ask - "what in the world was I thinking!?!"

We know what I was thinking beforehand: Not Much. But what about during that photographic nano-second, mechanically sliced from eternity? My mind was clear of drugs - I wasn't addled by alcohol, sugar cookies, or one of those ridiculous "energy" drinks the kids are into these days. Nonetheless, I was absolutely and completely high. My consciousness was elevated and I was highly aware of the excruciating beauty of time and space, and the malleability of my place in it. It was a very, very real moment... free of all distraction and pretense. It was just me, my body and the universe, conjoined in an epiphanal moment of Being.

Why? Why would I seek these moments? Why would I grab a ski rope and tell my friend to take off, so that by the time the rope snapped taught the boat was hydroplaning and I flew fifteen feet through the air, swallowing a liter of lake-water and narrowly avoiding passing out and sinking to the bottom? Why? I didn't want to die, or break my back, or drink sewaginous lake water. In neither of those situations were there any girls nearby that I wanted to impress. So... why?

I get a useful insight into this from a song a friend of mine wrote called "One More Pill". I may be endorsing it because I happen to have written a story "treatment" for this music video that they made to go along with it. Nonetheless, I think it does an admirable job of exploring why we do stupid things - things that hurt us. In it, he sings about his own drug use, and how he takes all these pills in order to "ease the pain".

One of the cool things about knowing musicians is that you get to know more about context of the songs than does the average listener, so I know for a fact that when Jesse wrote this song, he wasn't just talking about drugs. At the time, he had recently re-read Aldous Huxley's distopian novel, "Brave New World", in which there exists a drug in pill form called "soma". In the book, soma acts as a symbol for all the things we do to avoid the painful, difficult realities of existence. The song "One More Pill" is powerful, therefore, not only because it honestly refers to Jesse's own specific life/drug experience, but also because it connects to something bigger - a more universal truth about all the crazy things we do in order to avoid pain.

The next question - the essential question if we are to figure out how to change - is where this pain comes from. We can't heal the sickness until we pinpoint the disease, and I am willing to risk foot-in-mouth disease by saying that I firmly believe that the pain we all feel is the pain of being unloved. This, I think, is the fundamental sickness of humanity - an awareness within us that the perfect love we crave is absent from our lives, and a yearning to be able to live ecstatically in moments of loving abandon. In this, crack-heads, sugar-fiends, caffeine-riders and stupid teenage males are all the same.

While I still think that drugs both legal and illegal are an unwise choice, I can see that their use arises from the same impulse that drives all of us to do do stupid things - a loss of hope. We recognize our brokenness, isolation, pain and love-deficiency, and for a moment it seems too much to bear. So we improvise shortcuts - ways in which we can dull the pain, or experience some other emotion so intensely that the pain becomes inconsequential in comparison.

We stuff our faces with food and our houses with consumer "goods". We have rambunctious sex in unhealthy situations - or obsess about sex to the exclusion of other, more positive pursuits. We pile the dirt around us up into forts, and pretend that we are powerful and in control. We create complex religious systems, whereby we delude ourselves into believing that we understand or dominate the God of the Universe. We chase thrills and experiences and rushes and highs, attempting to forget for a while the inevitable slide back to painful reality - a reality that can never be improved by escapism.

This, at least, I know something about. I'm an expert, in fact.

I know as much as anyone the fear of being unloved, or unloveable. I know the lies and machinations I adopt in order to stave off the fear, and I know that they do not really work. I know that if there is any hope, it is not in them. I also know that one of the most hopeless activities of all is the one where we try to avoid pain by pointing at all the other ways other people try to avoid pain.

So where does Hope come from - or for that matter the Grace and Love towards which Hope yearns to burn? For my part, I believe it is God and that God sent Jesus to help me understand the way to Grace and Love; but I'll be durned if you catch me claiming to know who or what, exactly, Jesus/God is - or how, exactly, I jump from that belief to the Hope I need to stop hurting myself in desperation.

Where do I go from here, then? Must I run from destruction to destruction, chasing highs and smashing myself in the face with a metaphorical, metaphysical baseball bat? When do I rest? When can I just BE?

I don't have an answer to that question - not in the ANSWER sense. I do have the hope, however, that asking the question is enough and that the God I believe in but do not understand is grace-full enough to handle all my despairing attempts to grasp the Love that I have been designed, by God, to crave. For right now, at least, that's the only drug I need.
Labels: drugs