the amazing inferiority of women 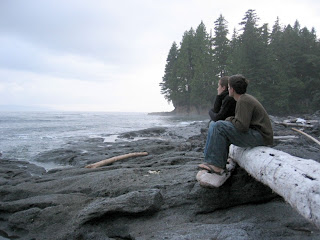 Women are inferior to men in lots of ways. I know this because my sister-in-law told me, as a way of explaining why she sees her relationship with my brother as her: 49%, him: 51%.
This is the bonus of living with other people for a week or so - you get insights into ways of thinking that are so different from how you think that they seem... well... insane.

I asked her for an example of how women are inferior to men and she said, "Well, like... sports and stuff." Hmmm. Setting aside the fact that there are many, many women who are superior to many, many men in the various sports, I had to argue back against her underlying premise.

"I know what you're saying", I answered, "But I don't know if superiority lies in being inherently capable, on average, of being stronger, faster or higher scoring. It seems to me that women are not inferior in sport but different, and that they are capable of greater grace and poetry of motion than men - not to mention better all-around sportsmanship, as anyone who's ever refereed both men's and women's sports will tell you."

At least, that's what I was going to say. She cut me off with gales of laughter, and then called my brother in so he could laugh at me, too.

It makes sense to me, though, and I have a blog where I can win every argument by being the only one talking - or at least, by having the power to delete anyone who disagrees with me (I don't, but I could if I wanted to you spamming mongrels).

So I say this: Why do we have to envision value in sport the way we do? Why must we make it about speed, spectacle, power and dominance? I would think that the fundamental purposes of sport ought to be the enjoyment of the body and the refinement of its abilities in the context of temporary communities occurring around games with guidelines and purposes defined for mutual pleasure. It would seem that the natural proclivities and inclinations of women (in general, often, et cetera), if actually taken to be as valuable and significant as the attitudes of men, would provide a balance to the sort of conceptualization we currently have, which glorifies winners and despises losers, implying that the to the victor ought to go, well, everything.

It is just this sort of destructive attitude - foisted upon the world by a patriarchal, consumer, capitalist society that thrives on the elevation of a small, brutish minority - that has led to our destructive attitudes towards not only sport, but other areas as well. It affects the way we approach work - how we devalue good, hard, human work in favor of any job that makes ridiculous money at whatever cost. It creates an environment for our thoughtless acceptance of war and it's inevitable collateral human damage. It perpetuates the sort of attitude that glorifies the economic oppression of the weak by the powerful. It glorifies the fornication of the American Church with the powers-that-are. In short, it is an ugly, vicious, anti-Christian attitude

It is very pleasant if you're the winner to believe that losers deserve to lose... at least for a while. The problem is that by very definition the chance of being a loser is much, much larger. Most people don't win it all, and if we maintain the idea that domination is more important than, say, neighborliness and love, then it follows that most people will live lesser, weaker lives.

I am not arguing against point-keeping in sport, or even competitiveness. Competitiveness is fun, and allows for measurable goals. It is not inherently wrong to have a winner in sport, or in any other endeavor (except, perhaps, a marriage, and maybe a bunch of other things I'm not thinking of right now) but if competitiveness is not moderated in some way it quickly becomes despotism. We can and should value excellence in sport, as we do in every other field of endeavor, but we need to be very careful how we define excellence.

It seems to me that this whole man/woman duality might offer us just such a moderating, modulating influence, and that if we could learn to value women as different but equal, instead of using the degrading term "inferior", we might actually take a step towards returning some semblance of balance to our deranged, teetering world.