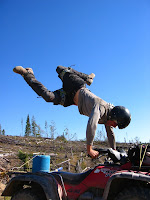 I really don't like the term "theology". It seems so pretentious - a systematic study of the nature of God. To re-word something Angelina Jolie once said in a movie: "talking about God is like dancing about architecture".

Maybe that would be more appropriate - to dance about God. Or sing about God. Or draw about God or even play the piccolo about God. I dunno. Maybe I'm just thinking this way because it's the point I'm trying to make in the book I'm trying to write. Today I reached the twenty-sixth page of my rough draft. Pathetic. Must... write... harder. I somehow seem to have turned all Kierkegaardian without ever actually reading him. Maybe it's 'cause he prefigured po-mo and I'm just a peon channeling the postulations of this age.

That's probably it, but since that is a po-mo thing to say, I'm going to forgo the cyclical thinking and just tell you the thought that's been going through my head this week: Jesus isn't about rules.

That's a no-brainer, right? Except, I really, really mean it. Not only is he not about rules, he doesn't really care all that much about them. Sure, he's willing to admit that some actions are less advisable than others, but the things that make Jesus unique among all religious figures - the very reasons why I like to think of him as divine - none of them are rules.

They're more like... guidelines. They're principles. They're attitudes to adopt. To name a few, they are: Grace, Humility, Love, Self-Sacrifice, Forgiveness and Freedom. I will go so far as to say that wherever and whenever somebody starts to harp on a rule, you can put a check in the box marked "not Jesus", and just check out and think about celebrities. I might even say that people who spend all their time harping on rules and demanding justice are big poo-poo stinkey heads.

That's not to say that good character and morals are not important. They are, but because of the complexity of people and cultures, they are never universally applicable - they're just the contingent, provisional way we enact or avoid the principles that are universal and that really matter.

My counsel to you, therefore (should you soul-search and discover your own poo-poo stinkiness), is to flagrantly break some small rule today. It might be the only way you'll get over your self-obsession. Eat that extra doughnut. Say that potty word. Inhale that second-hand smoke and enjoy it. Defy gravity. Will this work? I have no idea.

Switching topics entirely, I can tell this blog is going to be hard to do. It's going to get more difficult to do two things at once, but despite my committment to this book, I think I'm going to try to maintain a dedication to Theological Thursdays all summer. Cause all book and no play makes Josh a snippy harpie (if men can be harpies).