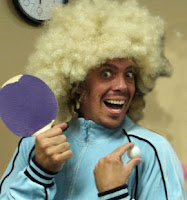 That's Wanito. Sometimes links like his sit on the side of this blog like mexican snowmobiles, collecting dust. I'm not going to let that happen. I'm going to tell you why I endorse Wanito's World. First, the dude is crazy. I love crazy. Second, he writes about a wide variety of random stuff, but manages to sound intelligent. Third, the dude is crazy. Fourth, he writes almost every day, so even if it's not always profound, it's always there, like an old friend (which he is). Fifth and finally, I tend to agree with him about a lot of stuff. One thing I like is agreeable people - makes me feel solidaritous, wrapped up in a big blanket of sameness. Homogeneity is evil, of course, unless it means that everyone becomes exactly like me.

Don't take my endorsement for it, though. I've re-posted the text of his latest mental meandering to give you a taste. It's a perfect Wanito blend of consumerism-bashing, state-of-the-culture bemoaning, marijuana-foam-sword-battling, spider-loving fun. Enjoy.

At work i took all the kids to church. Our home church is low key in a megachurch way, so they're laid back and funky; no stadium seating, no rotating, color changing lights, no brass section (usually)... but all of these are regular features of the church we take the kids to. One of the boys today said "If you're trying to get us to try out different religions, you should take us to other places sometimes.... like.... a Baptist church." Can you tell we live in Grand Rapids? That a Baptist church is a different "religion". I suggested a mosque or synagogue, but i don't think the kids knew what those were. Plus, i think they meet on Saturday, and i'm pretty sure the kids aren't THAT interested.

Anyway, we take the kids to a flashy, fancy, high-dollar megachurch. Before the service starts, the giant video screens up front show a countdown to eleven o'clock, with various trendy eye catching themes. Well, today's theme was various still pictures of wholesome looking, racially diverse people, with a constant background of a US flag, and down in the corner... a bar code. A bar code! It sat there..... existing.... it was clear from the look that it was intentional. My forehead wrinkled, and i asked one of the kids (smartest kid we have right now) for his analysis of the interesting juxtaposition. Instantly he said "That's God telling us that it's okay for us to use the Internet."

Um, okay... so i went on, pointing out how we're in church, and up front is a giant flapping American flag, and a bar code. Religion, patriotism, consumerism? Is this church telling us that religion and patriotism are products for us to consume??? Are they reducing God and pride in our country to, basically, double cheeseburgers from McDonald's? The kid said instantly "Those are really good." Sigh.

I got home, and instantly the kids said "Daddy! Come here! We found a jumping spider!" Sure enough, it was exactly that; a jumping spider. My kids are so smart. We watched it for several minutes, thrilling at the way she (don't really know the sex, but it was bigger than most jumping spiders i've seen) tracked us when we got close. And we worried about her maybe jumping onto us, which would be quite a surprise. But she didn't, and i managed to coax her onto my finger. Usually, spiders hate crawling on people -- in my experience they jump off as soon as they can. But this one was content to crawl about exploring. We ran downstairs to find a bug to put the spider near. A fly was lurking on the window. We put the spider up to the glass, and her attention was instantly riveted by the fly. She crouched. She jumped! And missed. The fly flew, and i got the spider back onto my finger for another try. This time she judged perfectly, pounced directly from my finger to the fly, and snagged it in her jaws, and dropped to dangle from a tether of silk. The fly flapped and wiggled, but the jumping spider held tight, and... ate the fly while we watched! Absolutely amazing. It was one of those things we will never forget. She's living somewhere on our front porch now, which seems to attract lots of flying insects... wasps sometimes... which sucks, because many wasps sting spiders and take them back to their nests paralyzed for their grubs to eat alive. Sad! And really freaking creepy.

Most of our local wasps are paper wasps, which collect nectar for their grubs, which is much less H.R. Geiger.

Then we went for a bike/scooter ride. We found a group of dreadlocked people fighting battles with foam swords and war hammers. I couldn't resist, so i flung Katrina up to my shoulders and walked across the street to chat. They were all very friendly, talking amiably with me, told me their names, and whacked ungracefully at each other with foam noodles held together with spray adhesive and duct tape. Awesome. And they smelled like weed.

Houston opined "They did seem a little mean." Because smoking weed is illegal, and we have told him that it's not an option for anyone in our family, therefore people who do must be mean. We chatted for a while about that... most people who smoke marijuana are quite friendly, probably even more friendly than most people. But we still don't do it in our family. Plus, i don't know how much weed costs, but i know i couldn't afford it.