the death of friendship 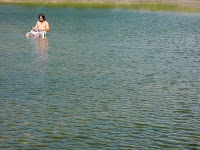 One of my tragic realizations of the past while is that for around ten years I have been gradually losing my capability to have and be a friend.

It started when I first left my home in the Amazon and moved to the cold, wet northern madness that is British Columbia. My first week of school I bumped into a cluster of bushy-tailed youngsters like myself - only they weren't like myself, they were talking about "Friends", and things that had happened recently to these friends, named Joey and Chandler and so on - and I had no idea what they were talking about. The weird thing was, I knew for a fact that some of them were from opposite sides of the country.

Later, of course, I learned that their connection was based on a television program which I had never seen, and that if I wanted to speak their language and join their cluster, I had better watch that show myself. So I did, a couple of times, and I learned that friends were a group of wealthy people who did very little actual work, and seemed to spend all their time lying to each other, insulting each other, and fornicating with each other in dizzying sequence.

Most of the people I was coming to know did not actually carry on this way, but I began to see that the show "Friends" had subtly affected their perception of what was acceptable in relationships. You were friends with people who were cool and good looking and sassy, and you mostly stuck by them because it was entertaining to do so. If your friends demonstrated any behavioral or emotional issues that made them unpleasant to be around, you insulted them until they got the point and changed. And they always did.

There was more to it than that, of course. Lack of commitment and willingness to struggle to maintain relationship had more to do with suburban "culture" than anything else, but the television show "Friends" became for me a touch point to the whole issue.

Then came myspace, and I began to hear friends and family members boasting about how many "friends" they had. They all knew that, technically, these people were more acquaintances than anything else, but the semantic damage was brutal, and exacerbated the already deeply entrenched attitude of friendship for convenience. "Friends" became less than people you used - they became tally points in an ever-growing cyclone of ego-boosting self-valuation.

It seemed, with the invention of facebook, that steps were being taken to reign this trend in. For most people, "friends" were generally understood to be more than strangers - the term covered everything from lovers to one-time acquaintances, but the assumption was that you had at least had some in-person contact with them. While this may seem to be a move in the right direction, to me it has done more to erode the significance of the term than anything else because now nearly everyone is on facebook and there seems to be less and less effort made to spend real face time with other human beings.

The phone calls have tapered off. The dinner dates are no longer made. No one pops in on their travels. "Why bother?" I've heard people say, "I know everything that's going on in their lives through facebook".

And so we each retreat more and more into our suburban castles of loneliness, surfing without vigor or joy into a net of our own devising, reveling in vapid, soulless interaction as we destroy the very thing we crave.

Maybe I'm overreacting. Maybe it's just me - maybe I'm no fun to be around. I have been known to get a little melodramatic. Changes to the meanings of words are an inevitable aspect of any living language.

I know that people still get together and do things, often at great inconvenience and expense, just for the pleasure of the company of other people. I know that true friendships continue to be made and lived and real connections exist. Even if the fact is that I am crying sour grapes because of some inherent unlikeableness in myself, I still do mourn for the thing that is no longer there - the deep human connection tied into and expressed by the word "friend" - because I consider it an unassailable fact that partly because of this change in meaning, many of us have shifted so far from what friendship can and ought to be that I do not know if we can ever find our way back.
Labels: art community identity