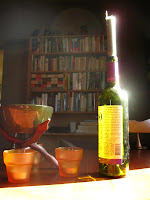 I am reading a book that God gave me. I say that without irony or that particular pride of pretension that I am privy to. God actually gave me this book as a swell favor because God likes me and knows I both want and need a little help now and then. I just HATE it when other people say things like that, but there it is.

Let me explain the ways of God to man - or at least the causal path that brought me to where I feel I can make this pretentious assertion without my usual damning prideful presumption.

First, I was born.

Second, a lot of other stuff happened that matters just as much (or little) as anything else in this story, stuff that brought the person I had become to that place where I was when I was coasting along as a server at the Olive Garden, looking for Something Else.

Third, my mom's friend's son turned down a job offer as an art teacher, so I heard about it and got hired the day before school pre-meetings started at a high school that bizarrely happened to fit my need for Christian Orthodoxy AND open, curious exploration. Politically, the school is more hard-nosed fundamentalist than I’d ever want to think about being, but the individuals in it are generally humble and honest enough to encourage humility, honesty and out of the box thinking in others.

Fourth, the superintendent of the school forwarded me a TED Talks youtube video on how the entire education system is foisting useless information on kids and damaging them by under-emphasizing creativity and creative discipline, which are crucial in such a fast-changing reality.

Fifth, I started browsing other TED Talks on creativity to show my classes and found another I liked with the author Elizabeth Gilbert arguing that the “artist as genius” myth created by the Enlightenment crushes artists by giving them too much responsibility. She suggests that we return to the original Greek concept of “genius” as an external being or force that visits – freeing the artist from the linked traps of guilt and pride. The upshot of seeing this video is that it made me decide I wanted to read this woman’s latest book.

Sixth, a short while later I stop randomly at a tiny thrift shop – the sort that’s all volunteer, all cash – and there on their sparsely stocked bookshelf was Elizabeth Gilbert’s book, “Eat, Pray, Love”. For fifty cents! There is no way I’d pay the fifteen bucks this book costs new (I’m cheaper than a flock of parakeets flying over Kmart) and I’m really far too forgetful to do the library thing.

I do not tell you these things to prove to you that God did, indeed, give me this book. They hardly begin to explain my faith or my process, and they most definitely do not provide an ordered, rational argument for my proposition.

Neither is this book teaching me the meaning of everything or revealing my Life’s Calling or giving me my Passion and curing me of all my idiotic behaviors and attitudes. Nope, there are no flashes of light or thunderous voices. Rather, I look in retrospect at this series of events and see the invisible hand of an Interested, Invested God. I see that God plopping this book in my hands as a gift, a nudge, and a thought-provoking kick in the ego.

I don’t mind thunderous voices and flashes of light are cool, but I think I’m getting over my love of spectacle enough to where I am glad enough for the quiet hum of a master weaver playing by his own rules, engaging me where I am in the moments I need it. This weaver isn’t concerned with fixing me by force like a broken machine – he’s making me with love, one beautiful strand at a time. He is weaving me into a community/tapestry with all the other strands that together become beautiful. I will never, I think (hope), see the whole tapestry perfectly, but it comforts me to know that it’s there and that I am a part of it. And sometimes, just for a moment, I think I can see chunks of it reflected off of someone else’s honesty.

Gilbert starts “Eat, Pray, Love” with the words, “Tell the truth, tell the truth, tell the truth”, a quote from a friend who’d found her sobbing in a bathroom. I think she does that, someways, throughout this book. Even though she is not a Christian in the sense that maybe I think I am and even though her conclusions about the Universe are not always the same as mine, I still believe she is telling me some things I really need to hear.

This makes me just a scoach uncomfortable. Without a second’s thought I’ll let a person with a different worldview teach me how to bake a cake, identify a constellation or use acrylic paint with greater effectiveness – but as soon as such a person tries to show me something about their spiritual journey all manner of alarum bells ring out, clamoring in my ears the messages of years of unquestioned belief-system education: “Watch Out! She might INFECT you with her God-damned ideologies!”

I will, therefore, share with you some nuggets of this ridiculously popular international bestseller (six strikes against it right there) and allow you to guess along with me if I can ever learn anything about God or myself, ever, directly from someone who in many ways does not think exactly the way I do.

“There are only two questions that human beings have ever fought over, all through history. ‘How much do you love me?’ And ‘Who’s in charge’”.

“There’s a reason we refer to ‘leaps of faith’ – because the decision to consent to any notion of divinity is a mighty jump from the rational over to the unknowable, and I don’t care how diligently scholars of every religion will try to sit you down with their stacks of books and prove to you through scripture that their faith is indeed rational; it isn’t. If faith were rational, it wouldn’t be – by definition – faith. Faith is belief in what you cannot see or prove or touch. Faith is walking face-first and full speed into the dark. If we truly knew all the answers in advance as to the meaning of life and the nature of God and the destiny of our souls, our belief would not be a leap of faith and it would not be a courageous act of humanity; it would just be… a prudent insurance policy.

I’m not interested in the insurance industry. I’m tired of being a skeptic, I’m irritated by spiritual prudence and I feel bored and parched by empirical debate. I don’t want to hear it anymore. I couldn’t care less about evidence and proof and assurances. I just want God. I want God inside me. I want God to play in my bloodstream the way sunlight amuses itself on water.”

“Prayer is a relationship; half the job is mine. If I want transformation, but can’t even be bothered to articulate what, exactly, I’m aiming for, how will it ever occur? Half the benefit of prayer is in the asking itself, in the offering of a clearly posed and well-considered intention. If you don’t have this, all your pleas and desires are boneless, floppy, inert; they swirl at your feet in a cold fog and never lift…

Destiny, I feel, is also a relationship – a play between divine grace and willful self-effort. Half of it you have no control over; half of it is absolutely in your hands, and your actions will show measurable consequence.”

“Guilt’s just your ego’s way of tricking you into thinking that you’re making moral progress. Don’t fall for it”.

(pg. 183, quoting a former Catholic nun she met at an ashram in India)

“As smoking is to the lungs, so is resentment to the soul; even one puff of it is bad for you. I mean, what kind of prayer is this to imbibe – ‘Give us this day our daily grudge’? You might just as well hang it up and kiss God good-bye if you really need to keep blaming someone else for your own life’s limitations.”

“We do spiritual ceremonies as human beings in order to create a safe resting place for our most complicated feelings of joy or trauma, so that we don’t have to haul those feelings around with us forever, weighing us down.”

“God dwells within you as yourself, exactly the way you are. God isn’t interested in watching you enact some performance of personality in order to comply with some crackpot notion you have about how a spiritual person looks or behaves.”

This woman came to all those conclusions while meditating and interacting with a spiritually-seeking community in India. If you’re like me, you are suspicious of the idea that people can come to God unmediated by earthly priests or religious structures. But maybe that’s what Jesus is all about. I’m not sure (thank God!), but I am fairly confident that I’m learning good things from Ms. Gilbert. And even though I think it’s a nonsensical thing to do, I’ll just motor on thanking God for what I think is a pretty awesome gift.
Labels: art books writing